Algie Gatewood’s charm and success will be missed 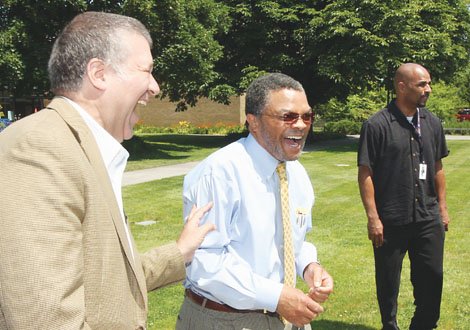 Portland Community College is losing one of its longtime leaders.

Cascade Campus President Algie Gatewood is returning to his roots to become the next president of Alamance Community College in North Carolina. Gatewood completes a nine-year tenure as leader of PCC’s urban north Portland campus. His last day on the job will be Sept. 30.

College President Jeremy Brown said he will gather input and advice on potential candidates in the weeks to come in order to appoint an interim president for the Cascade Campus, 705 N. Killingsworth St. Once that happens, the college will then launch a search for a permanent leader. There is no timetable on this process as of yet.

“Without a doubt, this has been one of the most difficult decisions of my career, for I have come to love Portland more than any place I have ever lived,” said Gatewood. “Never before have I encountered such a rich combination of cultural and ethnic diversity, natural beauty, and open-minded and forward-thinking people. This is truly a special corner of the world, and I will always carry a piece of Portland in my heart.”

“This is an outstanding opportunity for Algie to return to North Carolina to lead a community college and to reconnect with his family,” said Brown, who started as college president on July 1. “I regret that I will not get the chance to work more closely with Algie. He has had a lasting impact on PCC’s Cascade Campus.”

Cascade has grown by 66 percent in credit enrollment since Gatewood took over in 2004. To help accommodate his campus’ popularity, Gatewood shepherded the opening and dedication of several Cascade Campus buildings from the 2000 bond and has been instrumental in the visioning and engagement of the 2008 bond work currently going on at Cascade.

But maybe what he’ll be most noted for will be his partnerships that serve needs of the surrounding neighborhoods.

Starting in 2008, Gatewood and the college partnered with Portland Public Schools to form the Jefferson High School Middle College for Advanced Studies program. The Middle College partnership enables students from Jefferson High School to take college credit classes at the nearby Cascade Campus with the opportunity to earn up to 45 college credits at PCC by the time they get their Jefferson diploma.

Essentially, this means that most Middle College students have the opportunity to earn a four-year degree at little or no cost.

Gatewood negotiated the creation of the annual Washington State University – Vancouver Community College President’s Award, which provides two years of tuition-free study at WSU-V to a deserving Cascade Campus graduate. He also created and endowed, in honor of his late father, the Haywood Gatewood Memorial Scholarship to assist students pursuing a career in the trades.