Bells toll for justice and freedom 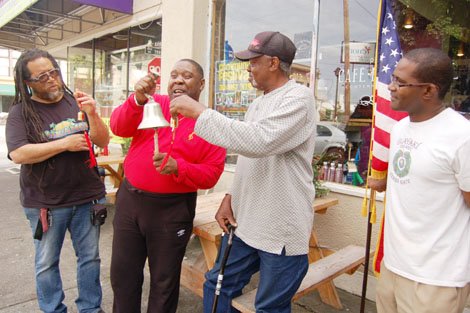 Pastor E.D. Mondainé (second from left) joins a patron outside his soul food eatery “Po’ Shines” in north Portland to symbolically ring the bells of freedom on the 50th anniversary of Martin Luther King’s infamous “I Have A Dream” speech. Photo by

Bells literally rang across the country at 3 p.m. on Wednesday as people symbolically rang bells in commemoration of the 50 years to the exact time when slain civil rights leader Martin Luther King’s delivered his famous “I Have A Dream” during the March on Washington for Jobs and Justice on Aug. 28, 1963.

In Portland, the owner of the soul food eatery ‘Po’Shines’ and the founder of Celebration Tabernacle, pastor E.D. Mondainé, took it upon himself to memorialize the moment with his staff and patrons. On the corner of North Kilpatrick and Denver in the Kenton Neighborhood, Mondainé proclaimed “We’re ringing the bell for justice, we’re ringing the bell for freedom”

“They were ringing the bells across the nation and I said you know what, we need to be a part of that,” he said.

In the half-century old address, King famously demanded that “freedom ring” throughout America.

Mondainé recalls seeing King’s speech on TV as a boy, and being “mesmerized by the figure on the screen.

Moving forward he hopes that African-Americans in Oregon will increase their concern for one another.

“We are as distant as night and day,” he said, referring to issues that impact the two percent of Oregon’s population who are African American.

In contradiction to Portland’s progressive branding, Mondainé characterizes the city as “20 years behind” on providing full equality. “We’re still judging people for their lifestyles, we’re still etched in the backwoods of the horrors of the Deep South,”

He encourages Portlanders to vote, support the local chapter of the NAACP, which has dwindled in numbers, and empower other socially active groups representing local African Americans, like the Albina Ministerial Alliance, Urban League of Portland, and Self Enhancement, Inc.