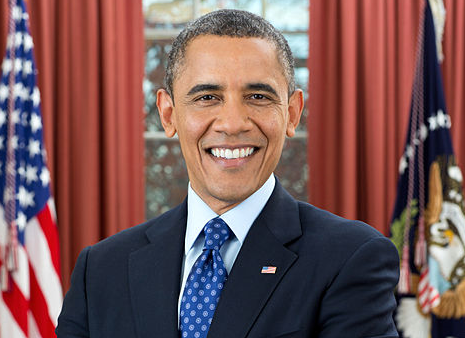 Barack H. Obama is the 44th President of the United States.

His story is the American story — values from the heartland, a middle-class upbringing in a strong family, hard work and education as the means of getting ahead, and the conviction that a life so blessed should be lived in service to others.

With a father from Kenya and a mother from Kansas, President Obama was born in Hawaii on August 4, 1961. He was raised with help from his grandfather, who served in Patton's army, and his grandmother, who worked her way up from the secretarial pool to middle management at a bank.

After working his way through college with the help of scholarships and student loans, President Obama moved to Chicago, where he worked with a group of churches to help rebuild communities devastated by the closure of local steel plants.

He went on to attend law school, where he became the first African-American president of the Harvard Law Review. Upon graduation, he returned to Chicago to help lead a voter registration drive, teach constitutional law at the University of Chicago, and remain active in his community.

President Obama's years of public service are based around his unwavering belief in the ability to unite people around a politics of purpose. In the Illinois State Senate, he passed the first major ethics reform in 25 years, cut taxes for working families, and expanded health care for children and their parents. As a United States Senator, he reached across the aisle to pass groundbreaking lobbying reform, lock up the world's most dangerous weapons, and bring transparency to government by putting federal spending online.