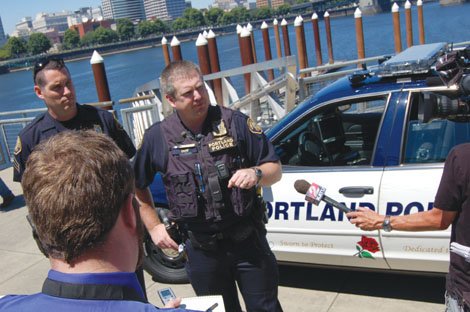 Officer Garrett Dow explains how Portland Police are using high-tech license plate scanners [pictured behind him on a police squad car] in an effort to reduce crime. The press conference was held last Wednesday after the American Civil Liberties Union reported on use of the new technology nationwide and questioned how the technology infringes on privacy issues. Photo by

Portland Police are responding to an American Civil Liberties Union investigation on the use of high-tech police license plate scanners to record and monitor the movement of motor vehicles from across the city.

Unlike the old method of getting behind a car and manually examining a vehicle’s plates, the more familiar practice, this new technology automatically and electronically scans the license plate numbers of automobiles to the left, right, and ahead of the patrol car using it.

Though the scanners have has been used on Rose City streets since 2008, Portland police have made the use of the scanners public information for the first time.

At a demonstration event last Wednesday, police displayed the technology and said they have increased the number of squad cars with the scanners from one to 16.

Police credit the scanners with giving them valuable tools in retrieving stolen vehicles quicker, and said they provide tremendous aid in outside investigations as well.

“In the last three months alone we have captured 70 vehicles that were wanted in connection with some type of crime, and that could include anything from a hit and run, to a robbery suspect, to even recently a rape suspect,” said officer Garrett Dow.

He estimates that the average officer logs around 100 plates a day, while the 16 scanner-equipped squad cars register the plates of upwards of 8,000 vehicles a day. They plan to continue expanding the number of squad cars with the technology.

Police said the license plate recordings are not shared with outside departments unless another bureau has reasonable suspicion that a specific car is linked to an ongoing criminal investigation. Portland has logged more than three million license plates through the system, more than Portland-Metro area’s number of registered motor vehicles combined.

The constantly updated database immediately alerts officers if a scanned plate might be connected with a crime. The data is retained for four years.

The ACLU says the scanners are a "single, high-resolution image of our lives."

"There's just a fundamental question of whether we're going to live in a society where these dragnet surveillance systems become routine," said Catherine Crump, a staff attorney with the organization. The group is proposing that police departments immediately delete any records of cars not linked to any crime.