Unified purpose against terror gets left behind 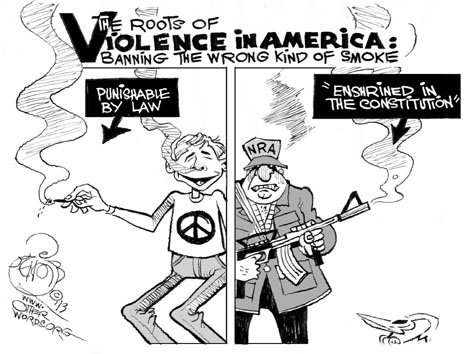 Banning the Wrong Kind of Smoke

Acts of terror like the ones committed at the Boston Marathon are reprehensible and lack moral or logical explanation. They rock us to our core.

They also unite us in common purpose. Victims and their families seem to become our own loved ones. We want to ease their pain. We want to do something to ensure that this doesn't happen again. Our togetherness as a nation is often most evident when something happens that's meant to break us.

Nearly 12 years after the 9/11 attacks, terrorism in our homeland still seems a nearly impossible reality — one that none of us want to accept. Still, communities across America are terrorized each day. But rarely do these victims and their families receive national media attention, or better yet, our collective attention.

Every year, 100,000 people are shot or killed with a gun in America. Every day, these acts of terror are carried out in homes, on playgrounds, schoolyards, neighborhood streets, even in houses of worship — turning spaces that should represent peace and sanctuary into places that elicit danger and fear.

Just two days after the Boston Marathon bombing, the Senate had an opportunity to curb another kind of terror facing our nation by taking modest steps toward keeping guns out of the wrong hands. Yet, it voted down a sensible gun background check bill. Never mind that 90 percent of Americans and 74 percent of National Rifle Association members support universal background checks.

It didn't even matter that a majority of senators (54-46) actually voted in favor of the bill. Because of the Senate's 60-vote majority rule, along with the distortions and political threats from NRA leaders, the bill went down in defeat.

President Barack Obama called it "a shameful day in Washington." Former lawmaker and gun violence survivor, Gabrielle Giffords, added, "I will not rest until we have righted the wrong these senators have done, and until we have changed our laws so we can look parents in the face and say: We are trying to keep our children safe."

We share her determination. Whether in Newtown or scores of other communities across the nation, one point is clear: Guns in the wrong hands can be weapons of mass destruction as deadly as a terrorist's bomb.

Where, we wonder, is the unified purpose in Congress to work toward firearm safety to address the reign of gun-related terror devastating so many of our neighborhoods?

Let's be clear: This issue is not about gun confiscation, nor is it an attack on anyone's rights. We know that this step is not a cure-all for the plague of gun violence in America. But, it is at least a first step towards doing all we can to ensure the safety of our citizens.

The city of Boston and its people deserve all the support and attention they have received in the wake of this horrific tragedy. I just hope that we can elevate our sense of unity, urgency and purpose to do what is right for the countless of Americans whose lives have been ended or forever changed by gun violence.

As we pray for the dead, the wounded survivors, and their loved ones, we urge the nation to unite against terror — including gun violence — everywhere.

We must all heed the words of eight-year-old Martin Richard, the boy who perished in the Boston Marathon bombing: "No more hurting people. Peace."

Marc Morial is the president and chief executive officer of the National Urban League and the former mayor of New Orleans.