‘All Hands on Deck’ for Veterans

Local governments pledge to help with jobs and services 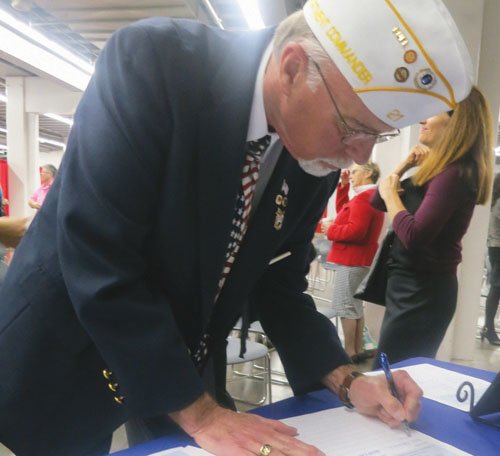 Oregon’s top veterans official says that it will take a broad community effort to meet the needs of four generations of military veterans who've served in five major wars. On Thursday, Multnomah County pledged to lead the way.

The county signed a historic “Community Covenant with Veterans and Military Families” along with cities of Portland, Gresham, Troutdale, Fairview and Wood Village.

The pledge took place at a formal signing with Commissioner Diane McKeel and Cameron Smith, director of the Oregon Department of Veteran Affairs. It came in the closing moments of a “Hiring our Heroes’’ job fair at Veterans Memorial Coliseum where more than 440 unemployed veterans had come looking for work.

“No one organization can meet all the needs of our military and veteran population,’’ said Smith, a former Marine who served three tours in Iraq. “Stronger collaboration across military, government and community partners is essential if service members, veterans and their families are to thrive in Oregon.

It is all hands on deck.”

There are nearly 40,000 veterans of all ages living in Multnomah County, according to the state, including those who served in Iraq and Afghanistan. As the troops are being withdrawn from Afghanistan, federal spending to support returning soldiers is expected to end, as well.

In response to that looming gap, Commissioner McKeel organized a steering committee to create "a road map" for local governments to help vets find local, state and federal paths to jobs, healthcare, and other benefits.

It is expected to be an example for all Oregon counties as they develop their own approach.

“This covenant is our commitment, as a community, to serve those who have sacrificed for our country,’’ said McKeel.“This is a commitment to offer a hand up to those who are struggling with homelessness, unemployment, or mental health issues. It is an investment in our veterans who are using their leadership and work ethic to enhance our local businesses, schools, and community organizations.

"Above all,'' she said, "this is our community’s pledge that we each have a role and responsibility to help improve the lives of our veterans and military families.”

Smith thanked McKeel, as members of the steering committee, veterans and advocates began signing the promise.

Mike Morris, Commander of the American Legion in Oregon, said “this is wonderful.”

“It’s about helping people find a home, get a job, it’s all about the American dream.”