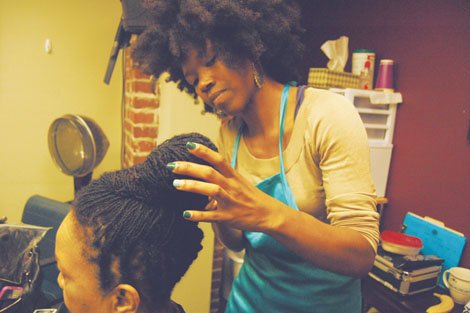 Salon owner Amber Starks is an expert in natural hair styling. Her business, Conscious Coils is located in Vancouver. Photo by

As a child, Amber Starks used to “beg” her mother to let her perm her long locks of hair. It proved to be a fruitless pursuit. By the time Starks was a fresh face on the campus of the University of Oregon, wearing her hair chemical-free was only, well, natural.

Now, the 32-year-old Starks owns her own salon and is exclusively focused on natural hair styling. She first opened her Conscious Coils business to assist children with their hair after discovering the degree to which African-Americans and Native-Americans were over-represented in the foster care system.

“I was like this is unacceptable, that one, we’re over-represented in the system and two, a lot of our kids don’t have assistance with haircare and cultural competence. So I wanted to provide my hairbraiding skills,” says Starks.

Located at, 100 E. 19th, Suite 100, in Vancouver, the small salon has expanded beyond her original mission with plans to move to Portland by January of next year.

She’s also politically active to remain true to her beliefs. Earlier this year a bill was signed into law significantly easing restrictions on practitioners of natural hair care in Oregon; Amber Starks led the charge on that bill.

She said the legislation gives African American women like her the tools to create economic opportunities within the community.

“This is just one thing to show us that we’re capable. Imagine how much more we can do for our own selves if we open up our minds to the possibilities,” she said. “We all have something we can do to support our people, I’m the last person to be like “black power” but I want our people to believe in themselves. Huge victories like this are reminders.”

Since the law went into effect, Starks says she’s had an increase in customers who have heard her story. While she says those accolades are nice and appreciated, she’s more anxious for the moment when she hears about a woman opening up a new salon because of the new regulations.

Much of her customer base remains in-line with her original mission; helping customers with adopted children, and providing a service to women who are often times transitioning from chemically manipulated hair.

“I’m getting something from my customers and I’m hoping to share something with them, that your hair is wonderful, it’s beautiful, let’s find how it works for you and let’s style it accordingly, but you get to be the one who chooses that, not me.”

Her knack for political activism remains just as sure as her hair remains un-permed.

“There’s not enough recognition that people are doing stuff and they’re making change,” she says. “I hope my business can be a conduit for money in the community.”

“I’m just really impressed by the people I’ve met that are doers, and that’s what I see about our generation, that we care, we’re doing stuff, and that doesn’t get acknowledged, but I plan to make sure it does,” she says.

For more information on Conscious Coils, visit the website counsciouscoils.com.