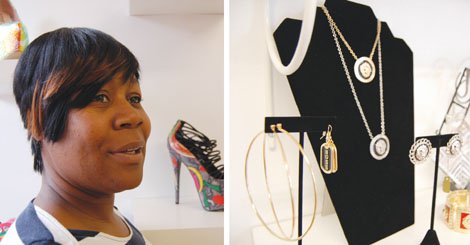 “On the day of my opening I felt a deep feeling of happiness,” says Christina White, the Portland native and owner of the shop located at 3519 N.E. Martin Luther King Jr. Blvd.

White said she was motivated to open a boutique that carried shoes, dresses, and accessories that women had great difficulty finding in Portland.

Many would describe her as a “fashionista,” but growing up she described herself as a “tomboy” involved in a variety of sports.

“The only girly thing that I actually did as a child was ice skate. I ice skated for about 7 or 8 years,” she said.

For her first year of college, White attended Portland State University. She later transferred to Hampton University, a private historically black institution in Virginia, and graduated with a degree in psychology. But upon moving back to Portland, she struggled to find a job in her field.

Eventually she graduated with a master’s degree in public health, but felt the need to go a different route.

“In my free time I was always very creative. In college, I made my own clothes by hand and wore them. But I didn’t know what I know about fashion now,” White said.

Over the course of approximately two years, White had been planning to start a business but procrastinated about the idea, “I just dragged my feet about it. I kept telling myself ‘I’ll get to it.’ I just didn’t know where to start.”

White admits that initially she was not aware there were career possibilities in fashion, “I didn’t even think of pursuing a fashion degree because I didn’t know that this kind of thing existed at all.”

She also admits that she had no previous experience in owning a business but that didn’t stop her from achieving her goal, “I didn’t take any courses in undergraduate school, I just Googled [information]. I figured it out myself.”

Although she spent a while procrastinating about opening the boutique in Portland, an accident at her job in New Jersey forced her to leave work for three weeks and was the motivation she needed to pursue the business,

“It propelled me to do what makes me happy and I am truly happy,” she said.

Ordering the merchandise, shoes and accessories needed, along with the planning and finding a location, White successfully opened the boutique, “in literally the amount of three months, from zero to now I’m here,” she said.

Northeast Portland was picked for the boutique’s location for a variety of reasons.

“It is the mecca of Portland [and] I wouldn't consider having a business in any other location,” she said. “Growing up in the area and living in her grandparent’s home is how she came up with the name “Thirty27.”

In numerous department stores and malls there are large amounts of inventory, White said that is not the goal for her boutique.

“Currently I carry only 10 different styles of shoes and a handful of dresses. And once I have sold out or sold majority of those items I will be ordering a whole new collection of shoes and dresses. My goal is to provide woman with a variety which keeps fashion young and refreshing,” she said.