Blue presents: The Tao of Pimpin’ 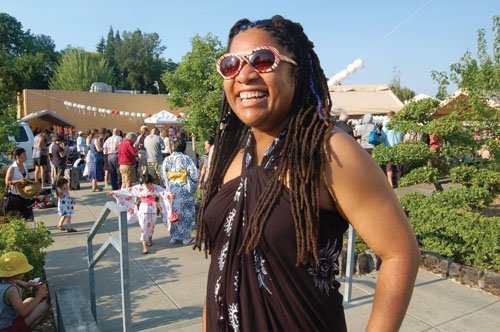 Beaverton-based author Blue merges the ancient Chinese text of ‘Tao Te Ching’ with concepts of pimp culture in ‘The Tao of Pimpin.’ Photo by

Uhuru Rahman to some virtually, better known to many in the analog world simply as ‘Blue’ recently published her semi-autobiographical book titled ‘The Tao of Pimpin.’’ Now, she is inviting those willing to discover just how two seemingly different concepts can lead to a journey of fulfillment.

The Portland Observer sat down with the Beaverton-based author at a Buddhist celebration in southeast Portland where she would later play Taiko drums, which she recently discovered.

For her, she says, the book was a meditation. “When I’m honest with myself when I write then everything else is like who gives a sh*t.”

Rarely minced for words, the East St. Louis, Ill. native has been practicing the Chinese originated philosophy for some time and says lessons learned from Taoism have led her to the conclusion that the “Tao rules everything.”

Also on the note of ‘everything’ Blue affirmed that, ‘’everything in its purest form is good.” Lessons from the Tao.

When it comes to pimping though, she says it’s historically been demonized despite its prevalence in places ranging from the music business, academia, to the board room. In this scenario she says just as a pimp knows they have just pimped, so knows its subjugate when they have in fact “turned a trick.”

As for her, Blue says she’s never pimped anything “per se”, except for “the system” something she says she’ll expound on once the statue of limitations allow for such details.

In essence, the book is Blue’s translation of what essentially the 81-chapter handbook to Taoism, the “Tao Te Ching”—written centuries ago—but for those looking to pimp more efficiently, using the “way.” ‘Why is that?’ you may ask; because according to Blue, “Life is easy.”

To purchase The Tao of Pimpin’ visit the website battlecryofthebutterfly.com/taoofpimpin.