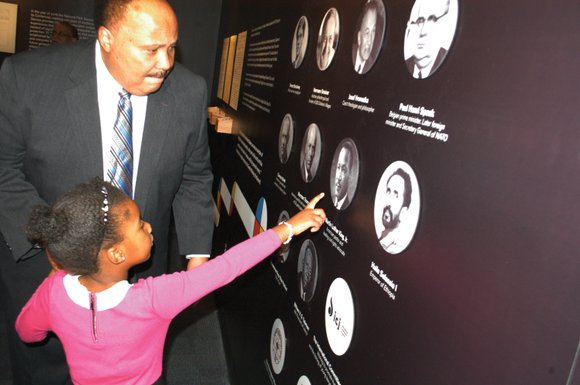 Since 1964, documents relating to King’s nomination, notes and reports have been under lock and key in the Norwegian Nobel Committee’s extensive archive.

The exhibit of more than 50 artifacts, letters and other documents reveals that the American Friends Service – the Quakers – nominated the Atlanta native who led America’s transformative human rights movement of the 1950s and ’60s. The medal is not part of the display.

“1964: Martin Luther King Jr.,” which opened Dec. 10 and runs through Sept. 27, 2015, was part of a two-day celebration of the 50th anniversary of King’s Nobel Peace Prize at the King Center and the Center for Civil and Human Rights.

A letter on display, written by Colin W. Bell, executive director of the Friends Service Committee, to the Nobel Selection Committee, said King’s significance went far beyond the issue of race, which he had become known for in America since he led the Montgomery Bus Boycotts in 1955.

“The [American Friends] board … was conscious of the baleful effect of racial tension upon the organization of peace,” Bell wrote. “It felt that the work and witness of King, and the spirit in which he promoted ‘the dignity and worth of the human person,’ were influencing the attitudes of great numbers of men and women throughout the world.”

Former U.N. ambassador and Atlanta mayor Andrew Young told the AJC that the Quakers were deeply involved in the movement and some were educational or spiritual mentors to civil rights leaders.

Eight members of the Swedish Parliament voiced their support for King in letters to the selection committee.

Also revealed in documents shown for the first time in the United States is that King was one of 44 people considered for the Nobel Peace Prize that year. The others included Ethiopian Emperor Haile Selassie and U.S. President Lyndon Johnson, who signed into law many civil rights initiatives.

In another document, a senior lecturer for the Nobel Committee wrote that despite opposition and arrest, King retained a generosity of spirit toward those who disagreed with him.

“It has, without a doubt, been of incalculable significance of the nonviolent movement that a certain magnanimity in his personality allows him, while sharply attacking his opponents’ views, to understand them on a personal level,” the lecturer wrote.

“King’s struggle appealed to the common Norwegian and his cause had great support in the Norwegian Society and our media praised him,” she said.

As she walked hand in hand with her father through the exhibit, Yolanda Rene, who is named for her late aunt, kept pointing at the photographs of the famous grandfather she will never know.

“He was so young,” she said to her father.

Yvonne Blythers of Stone Mountain was among the first visitors to view “1964: Martin Luther King Jr.” She said she wasn’t sure what to expect and was so impressed she plans to return with her Girl Scout troop.

“I’m just blown away,” she said halfway through the exhibit. “I didn’t know they kept all that secret.” Now Blythers said she wants to know all the details.

Dominique Smith of Atlanta says the exhibit really brings home the impact that King had on people’s lives.

“He was such an important figure not just to Americans but around the world,” he said.

In 2012, Malala was shot in the head by a Taliban militant who opposed her human rights activism.