Drawing to a Final Verdict

Ancer L. Haggerty reflects on journey to and from the bench 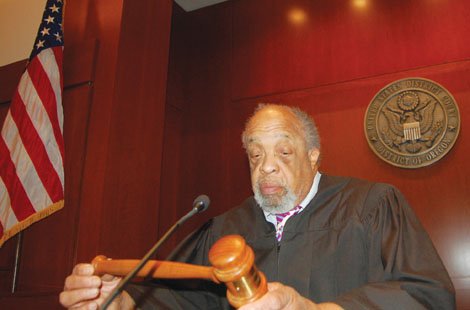 Senior U.S. District Court Judge Ancer L. Haggerty reflects on his journey to and from the bench of justice at the federal courthouse in Portland. Born in Vanport, three years before a devastating flood wiped out the city, Haggerty rose to become both the first African-American federal judge and the first black circuit court judge in Oregon. Photo by

Judge Ancer L. Haggerty seems to prefer to let his distinctions and accomplishments shine for themselves. The journey that saw him go from just another face in the Marines to making history as both the first African-American federal judge and first black circuit court judge in Oregon was not necessarily what he envisioned for himself early on.

Haggerty came up in a Portland that was deep in transition for people of color; he was only 3-years-old when the storied Vanport projects were completely washed away by a Memorial Day flood in 1948. The disaster forced him along with his parents and thousands of other blacks who lived in the development into the segregated neighborhoods of north and northeast Portland.

As many of the Vanport survivors began to settle into homes in other parts of town, their children were integrated into schools that were primarily white. Haggerty was a student at Woodlawn School and later Jefferson High School during the 1950s and 60s, both majority white at the time. While he recalls being conscious of these realities, to him it wasn’t that big a deal.” Instead he focused on his studies.

After graduating from Jefferson he set off to the University of Oregon where he’d earn his Bachelor’s Degree in 1967. He would swap the “green and yellow” of his alma mater for the scarlet and gold uniform of the Marine Corps that same year. It was here where he would develop his love for justice.

Haggerty remembers during his time in the military how fellow officers would call on each other for representation in military court.

Haggerty, a lieutenant, intensely studied the code of military justice. He soon became one of the members of his platoon to help service members who were facing charges for a breach of military discipline.

“I was comfortable with doing that, and I had some success,” he said

As his accomplishments as a counsel under military law began to total up, his achievements got noticed by higher-ups. Haggerty was soon promoted as a member of the Court Marshall Panel where he could no longer represent anyone accused of an offense.

“You actually had hardly any voice at that level,” Haggerty remembers.

Despite his newfound position, at night, Haggerty says he would still often find himself helping people on both sides of a case.

After serving three years as a Marine, Haggerty sank his feet into a trail that would see him rise to the top of the legal profession.

His career began by enrolling in Hastings College of Law of the University of California. In 1973, he took the bar exam, passing on his first attempt.

He then returned to Portland and worked as a public defender for a sum total of four years. Then he went into private practice for over a decade doing litigation. In 1989, he became a Multnomah County District Court Judge. One year later, he was elected Circuit Court Judge, also in Multnomah County.

Again, his risings did not go unnoticed by his higher ups. But this time, it was the President of the United States.

In 1993, President Bill Clinton nominated Haggerty to the federal bench.

Congress eventually accepted the President’s nomination as the year came to a close. While that decision, 20 years ago broke another racial glass ceiling, in Haggerty’s mindset, it was no different than his experience of being a racial minority in school.

“It’s just the circumstances of my getting the position and being African American at the same time,” he said. “Obviously I’m glad that it did happen, but I don’t even think about.”

Reflecting on the many final decisions he’s had to hand down over time, Haggerty says he is comfortable with the great bulk of them because he always goes for the “right verdict.”

“Some decisions are easy, some are hard, it all depends on what facts perk up in the case,” he said.

Though he says he is not a big follower of statistics, when asked, he acknowledged the racial disparities that have come through his courtroom, but said he does not allow that factor into his decision-making when considering a verdict, only the facts.

“We have to look at reaching the correct result regardless of what politics may enter into it. We just push those things aside,” he said.

Haggerty also was asked about a bill passed by the Oregon Legislature last year that requires lawmakers to examine any proposed legislation for its potential to disproportionately affect certain minority groups. He said it was important to evaluate whether the justice system works for everyone.

For this Vanport survivor, however, the intricacies of making rulings on the law will soon be past.

With multiple decades of time clocked on the business of justice, 69-year-old Judge Ancer L. Haggerty is calling 2014 his last go-around on the bench.

“I’m not gonna become a ski bum,” he jokes, “but I’m gonna retire and drift into the sunset.”