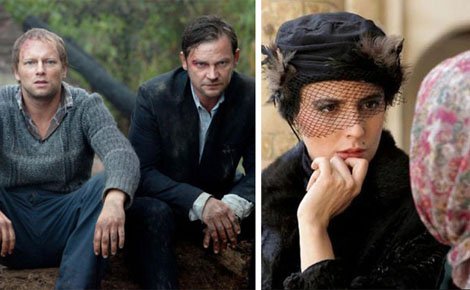 Ireneusz Czop (left) and Maciej Stuhr star in 'Aftermath, ' a powerful Holocaust story that was inspired by a true story of a Polish town. The movie plays again on Sunday, Feb. 23 as part of the Portland International Film Festival. "The Last Step" (right) is an Iranian feature film starring Lelia Hatami, and has concluded its Portland screening. The entire festival has been extended to Feb. 26 to make up for earlier cancellations due to snow and ice. For a complete schedule, visit nwfilm.org. Courtesy of Menemsha Films

The film spans a period of 13 years, beginning in 1995, and charts the progress of the project along with the parallel maturation of a bookish young man at the center of the story, Majime. Shy and socially awkward and working in the sales department of a large Japanese book company, he is tapped to replace the main editor in the company's dictionary department when the man resigns to care for his ailing wife. Majime (whose name means "diligent") naturally exhibits the painstaking care and love of words needed to be inspired by the project of creating a "living dictionary" that incorporates modern words and slang. The work and the support he receives from the small department of misfits he works with also assist him in his own work of coming out of his shell (just barely) and learning to communicate enough to woo the quiet chef he meets through his landlady.

The Great Passage proceeds at the pace you might expect from people who love words and dictionaries, but it is a gently comic story with interesting characters that feels distinctly grounded in Japanese culture. (Plays again on Feb. 19)

"American Dreams in China" (7), though a bit uneven, offers a window into China's perception of how the Chinese are treated by the U.S. and also a Chinese perspective on the U.S. itself.

Wildly popular in China, this film from Hong Kong has been dubbed "the Chinese Social Network." It tells the story of three young men who meet at university, bond over their dreams of studying in the U.S., and end up founding a hugely successful corporation that tutors students in English and coaches them on what they need to obtain a U.S. visa. The U.S. actors in the film are distractingly awful and the plotting sometimes feels clumsy, but in the end I wondered if my perceptions as to the latter might in part reflect some cultural differences; ultimately the film sells its distinctly Chinese perspective on U.S-Chinese relations. (Plays again on Feb. 20)

"The Snow on the Pines" (6.5) is primarily interesting for what it may signal about a shift in Iranian society. It lacks the complexity that I have so admired about other Iranian films (including "The Last Step," discussed below). By Western standards, its story of a woman who discovers that her husband has been cheating on her is fairly well-worn territory. But for an Iranian film to focus entirely on the woman's experience, including her burgeoning interest in a man not her husband, feels pretty remarkable -- indeed, I was having trouble wrapping my head around the fact that this film actually won awards in Iran. Apparently it took a couple of years to get the film past Iranian censors, but things must be shifting if this film can garner critical interest in mainstream Iranian cinema. (Plays again on Feb. 20)

"Thy Womb" (5) offers the opportunity to observe the culture of one of the Philippines Muslim provinces, the island community of Tawi Tawi, but doesn't provide the narrative structure to help non-Filipino audiences understand what they are seeing.