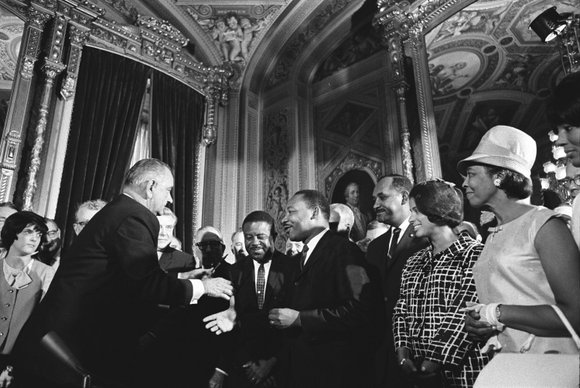 President Johnson, Martin Luther King, Jr. and Rosa Parks at the signing of the Voting Rights Act on August 6, 1965.

Georgia resident Dorothy Cooper had been voting for more than 50 years with no problem, but in 2012 she almost couldn’t.

It was all due to the new voter ID law Georgia had passed under the guise of fighting voter fraud, but critics of the law said its real purpose was to make it harder for individuals like Cooper – the black, the poor and the elderly – to vote.

Although Cooper had her birth certificate, proof of her address, a voter registration card and other materials, she didn’t have a copy of her marriage license, so she was initially denied her state identification card. Cooper, now 98, eventually got her ID card and was able to vote in time for the 2012 presidential election, but her plight did not deter voter ID law proponents. In fact, restrictive voters laws have only spread further and wider since the 2012 re-election of President Barack Obama. This is thanks in part to the Supreme Court striking down key parts of the Voting Rights Act of 1965 in the summer of 2013.

The dismantling of these key portions caused a flood of restrictive laws to flow into states like Texas, Virginia, North Carolina, Florida, Wisconsin and others. In nearly every case, Republican legislators said it was about making sure voting fraud was minimal, when the reality was more about the GOP’s ability to count.

Demographics in Southern and Midwestern states were shifting.

Whether it’s from immigration and a greying of the white population like in Texas and Alabama or revitalized urban centers attracting more “liberal-minded” young professionals like in North Carolina and Virginia, the more conservative members of the Republican Party saw that the white vote was becoming less and less an indicator of whether or not an election would go one way or another.

Unfortunately, rather than use this as an opportunity to widen the GOP brand and make a play for the votes of black people, Latinos, young people and women, they doubled down on the aging white suburban voter.

During Reconstruction, around 2,000 back men served in elective office, including two who served as senators and 15 others who were members of the House. In many former slave states, such as Mississippi, there were large black majorities and now these former slaves were voting. For the former slave owners, rather than find a way to work together to rebuild the war torn South, they chose the familiar path of oppression and regression. Restrictive voting laws were created, Jim Crow laws popped up all over the South enforcing racial segregation and violent domestic terrorist groups, like the Ku Klux Klan and others began a reign of lynchings and terror to keep freed men and women “in their place.”

While we’re not facing the Klan, we are facing a resurgence of laws that have the potential to undo decades of voting progress. It is important to make it clear to the GOP that if they aren’t willing to try to appeal to voters of color, they can’t expect voters of color to stand by idly while their vote is under attack. We’re here in this country and we have always been here. This pushback will not stop the ongoing march of progress.