Basketball great back on campus to preview film about his life 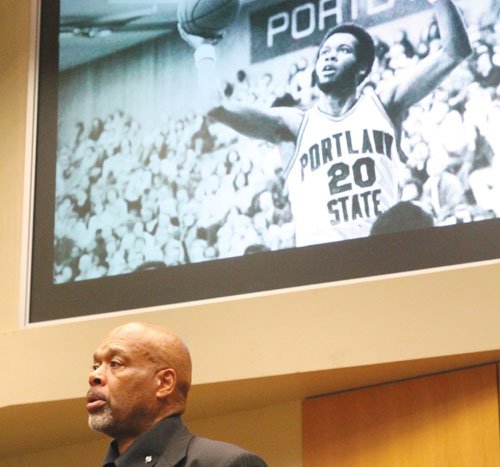 The movie tells the story of Williams and his teammate Dwayne Polee at Manual Arts High School in south central Los Angeles where they were able to put aside inner-city adversities and overcome the obstacles of drugs, abuse, family poverty and violence. More importantly, years later after careers in the NBA, they return to become coach and role models at the very same high school where their hoop dreams began.

Williams and movie creator and producer Frederick Hawthorne attended the July 15 screening that was viewed by some 200 people at Hoffmann Hall.

After many handshakes and photos, the film was screened, then Williams and Hawthorne took part in a question-and-answer session that remembered Freeman's 81-point game (official Howard Mayo who worked that game was also in attendance and spoke) among other career highlights at Portland State and throughout his career.

Freeman Williams played basketball at Portland State from 1974-78. He scored 3,249 points in his career - second only to Pete Maravich in NCAA history. Williams was a first team All-American in 1978. He went on to play six seasons in the NBA for the San Diego Clippers, Atlanta Hawks, Utah Jazz and Washington Bullets.