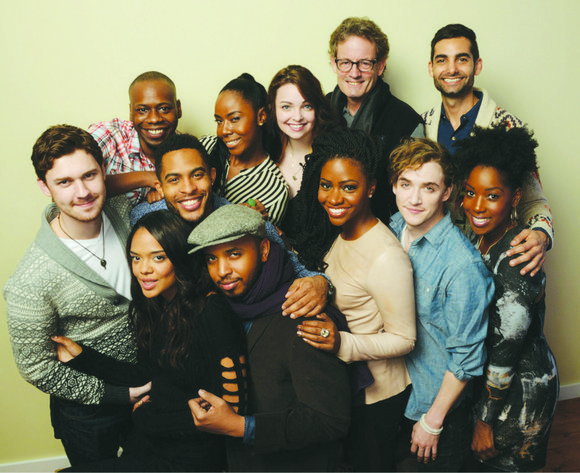 The Cast of 'Dear White People'

When was the last time you saw a film that challenged your assumptions about identity? Or one that depicted anything like the variety and complexity of identity struggles and micro-aggressions experienced by people outside the dominant culture(s)? Or one that managed both to make you feel understood and to make you squirm?

"Dear White People," the first feature film of writer-director Justin Simien, manages all of those things and more, which is to say that it is quite an achievement. That is not to say that it is exactly fun to watch or even wholly successful -- but even as I write that, I question whether my discomfort with some aspects of the film says more about me than it does about the film. To pitch a film at this level of complexity and to manage to sustain it there is more than most films even aspire to.

Please don't stop reading or decide that this film is not for you. It is for you. No matter who you are, "Dear White People" will repay your investment of time and discomfort, will plant fruitful questions in your brain that deserve your attention, and will sharpen your awareness of things happening all around you. And, as I like to remind myself, what's true is true. The only question is whether you deal with it or it deals with you. And the truth will deal with you, even when the privileges you enjoy insulate you from perceiving it.

The truth in a predominantly white, Ivy League university like the fictional Winchester University -- like most places housing access to privilege -- is a lot more complicated than is depicted in popular culture or even popular parlance. The roving vantage points of the film involve mostly the African-American members of a mixed cast, and the variety among those characters is considerably more than we usually see in films (including in the sort of romantic comedies and romantic thrillers that seem to predominate among the few films with majority-black casts). Chief among the characters here is Sam, whose campus radio program shares the movie's title and who dispenses pitiless jibes at the hypocrisies and micro-aggressions that African-Americans experience in their daily interactions with clueless Caucasians. ("Dear White People, stop touching our hair. Does this look like a petting zoo to you?") Sam's perceptions are sharp and spot-on, but her own behavior frequently verges into unkindness, including to the white boyfriend who she keeps secret from her otherwise all-black social set.

Sam is running for leadership of a residence hall whose traditional status as all-black has been altered due to a change in university housing policy. This is a matter of controversy about which she disagrees with her opponent, her ex-boyfriend Troy, a clean-cut, athletic campus leader who is much easier for majority-culture sensibilities to accept than Sam is. Troy is dating Sofia, the daughter of the white university president, who in turn has edged out Troy's father, the dean of students, in most competitions in their decades-long-rivalry. Sofia's brother, Kurt, is the editor of the college humor magazine and a defiantly politically incorrect provocateur who reserves especially obnoxious taunts for Lionel, a nerdy gay black student who doesn't feel comfortable in any community and whose rangy afro evokes fascination in his white peers and irritation in his black ones. Also in the mix is Coco, a calculating economics major from the South Side of Chicago eager to distance herself from her original name, Colandrea, and its attendant ghetto associations. Coco seeks to forge a reality television career and a more assimilationist identity in direct contrast to Sam.

All of this culminates in a black-ghetto-themed party in Kurt's residence hall where white students don black-face and polyester and gold chains and teeth and other accoutrements of black culture as popularly depicted. (Simien cannily includes with the end credits news articles establishing that such parties have sprung up on actual college campuses across the country.) How the party came to be and how the black characters incite and respond to its elements is where all the disparate plot elements converge.

Everyone is angling. Sam indulges romantic attention from Reggie, a political ally who she apparently sees as a more suitable romantic partner, though her heart doesn't seem to concur. Troy smokes weed several times a day to smooth his struggle to assemble a persona powerful-yet-non-threatening enough to please his father, his white girlfriend, and enough of his peers to fuel his political ambitions. Coco chafes at the sense that, for black men, she is destined to be only a way station to a white girlfriend. Bright and observant Lionel struggles to find a vantage point from which to express himself, but his experience mostly buffets him between bullying and invisibility and exploitation.

Shifting between the half-dozen plot elements, the film's tone often feels self-conscious. But ultimately the complexity serves the film well; Simien is trying to get at themes we resist looking at, and multiple vantage points is a smart way to back us into doing that. The film is pitched at satire, and though the elements sometimes feel a bit too carefully assembled, they are more complex than stereotypes. The film captures the sense that, for African-Americans with a shot at rising, forging an identity is uniquely complicated. Am I black enough? Selling out? Selling short? How hard should I work at being non-threatening to the people with the means to help me rise? What should my agenda be if I succeed? What would success even look like? Is there any point to asking these questions at all? Will I even have any say in the answers once I get there?

As a person of mixed (European and Mexican) heritage, I related to these struggles, both from my own experience and from that of my friends from outside the dominant legal culture trying to make it in the world of law. But I also related to the anxiety evident in the white characters. Even denial (also much in evidence) appears at times to spring from a place of anxiety. I'm one of the good people, right? I get it, right?

"Dear White People" doesn't presume to answer these questions. It is wisely content to pose and play with them. In doing so, it has offered up a collection of characters who, with the exception of Kurt (undeniably a jerk) and Lionel (the most guileless), are by turns unlikable and worthy of compassion. And it has aspired to more than any film I can think of: a conversation about privilege and identity and race that sits with the questions instead of pretending that they have been or can be easily put to rest, by anyone.