Students and other activists raise concerns as decision nears 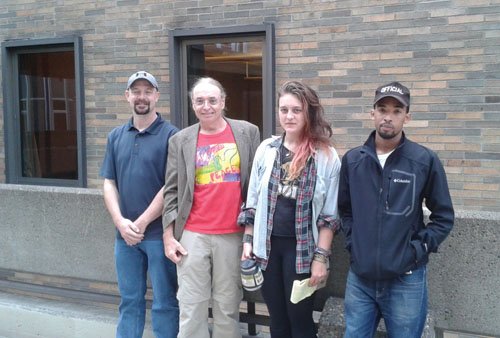 Portland State University student group representatives and a PSU professor are leading the opposition to a proposal to deputize campus police. Pictured (from left) are Adam Vogal of Students United for Nonviolence; Tom Hastings of PSU’s conflict resolution program; Leona Kindermann of the PSU Student Union; and Deyalo Bennette of the Black Student Union. Photo by Colin Staub

A deputized police force for Portland’s major university is a proposal that’s drawing fierce opposition from some PSU’s student groups, professors and civil rights activists, especially in the wake of the shooting of Michael Brown in Ferguson, Mo., as well as the history of numerous local Portland police shootings.

PSU’s board of trustees, a citizen board which is in its first full year of governing the university, will soon vote on the plans.

Last fall a task force assigned to study and make recommendations on campus police came to the conclusion that PSU needs fully-sworn police officers on campus. This could come about in two ways, said the task force: Either contract with an outside agency that can provide police officers, or transition PSU’s existing public safety office into a campus police department.

The university initially reached out to the Oregon State Police, Portland Police and Oregon Health Science University’s new deputized police force. All three declined to contract out with PSU, so the university began to investigate deputizing its own public safety officers.

A campus police force would have a number of effects. It would double the number of officers on campus to about 30 or roughly one officer per 1,000 students. It would cost the university roughly $1.5 million.

If approved, the proposal would expand officers’ jurisdiction, which is complicated on a large urban campus like PSU. The area encompassing the campus is made up of a combination of university-owned, public, and private property. Currently officers have jurisdiction limited to PSU property.

“If there’s a fight outside the Cheerful Tortoise [a bar one block off PSU property], campus officers can’t intervene,” said Scott Gallagher, director of communications at PSU. “It’s kind of hard to say, ‘Hey, can we move this fight across the street so our officers can handle it?’”

The move would expand officers’ authority, giving them the ability to apply for search warrants, hold people for mental health reasons, and cite people for violations.

It would also arm campus police officers with firearms, which is one of the more controversial points of the issue.

The task force cited a potential active shooter situation as a reason for arming campus police. The current public safety office “has no capacity to respond to and disrupt an active shooter and must rely on the response of the Portland Police Bureau,” said the task force.

While campus officers generally have a response time of around two minutes, it can take Portland Police up to 20 minutes to respond, depending on prioritization, Gallagher said.

A strong opponent to an armed police force on campus is Tom Hastings, a professor in PSU’s Conflict Resolution program.

He said the proposal has escalated, “from a poor idea into the outrageous realm.”

“The national trend is that people of color and those from the Middle East, and many others, who know they are marginalized and are profiled by police, are pushing back and they are finding more allies,” he said.