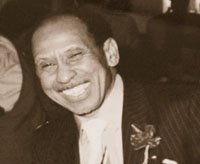 Willie Thomas, 82, passed away peacefully on April 1, 2015 at home with family surrounding his bedside. He was born Nov. 7, 1932 in Akron, Ala., and grew up in Tuscaloosa, Ala. He was the second oldest of 15 children.

Following high school, he moved to Portland for better employment opportunities. In 1954, he enlisted in the U.S. Army and following an honorable discharge, worked at the Portland Airport and later for the U. S. Postal Service, retiring after 29 dedicated years in 1989.

In 1957, Willie met the joy and love of his life, Pearl Mitchell and they were joined in holy matrimony in 1958. He was a devoted husband of 56 years, a father, grandfather, brother and also a friend to many. He will long be remembered as a warm, kind and caring man with a strong work ethic. Some of the precious memories include “Little Willie” thoroughly enjoying a good game of either dominoes or running a “Boston” while playing Bid Whist at the card table!

Preceding him in death were his mother Nicie Bragg Thomas Hicks and father James Thomas; brothers, Clarence Thomas and Woodie Hicks; and sisters, Bettsie Mae Washington, and Linda Hicks. He also leaves to cherish his memory a large host of other relatives and friends.