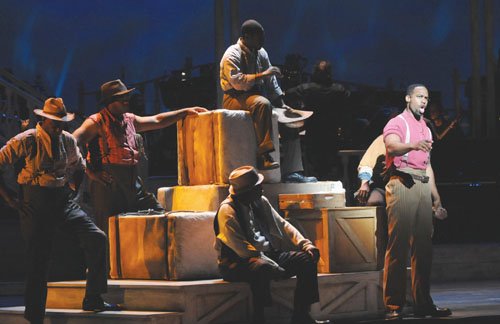 The Portland premiere of the awarding-winning Harold Prince version of ‘Show Boat’ opens Friday at Keller Auditorium. The play revolutionized American theater by its epic story and being the first to use music and dance to explore what it’s like to be black and white in America. Mark Kiryiuk

The curtain is opening for Portland Opera’s production of “Show Boat,” the award-winning Harold Prince version of the epic play that revolutionized American theater with its musical sophistication and embrace of racial diversity on stage.

The saga of three romances that blossom aboard a Mississippi River show boat reflected the true face of America as it was and still is today, more than 80 years later.

Jerome Kern’s score for the musical teems with powerful choruses, romantic duets and masterful songs, including “Bill,” “Make Believe,” “Can’t Help Lovin’ That Man,” and above all, “Ol’ Man River.”

Show Boat presents an enormous cross-section of American life, contrasting wealth and poverty, urban life and rural, northern and southern attitudes, and the impacts of privilege and prejudice. Without losing the vitality and romance of the central story, it manages to confront racial injustice sympathetically and present what, in 1927, was a progressive point of view about the roles forced upon African Americans in late 19th and early 20th century America.

Not only did Show Boat integrate words and music and plot; not only did it deal with serious issues, altogether unheard of in Jazz Age musicals; but it provided a venue in which black and white actors first appeared together in an essential and equal way on stage.

Show Boat also subtly depicted the capacity of white America to appropriate and profit from music and dance styles that originated in black culture. It’s credited with being the first in a line of shows to use music and dance to explore what it has meant to be black and white in America.

Performances are scheduled Friday, May 1 through Saturday, May 9 at Keller Auditorium. Tickets can be purchased at the Portland Opera Box Office or by phone at 503-241-1802.