Forging a Path on the Court 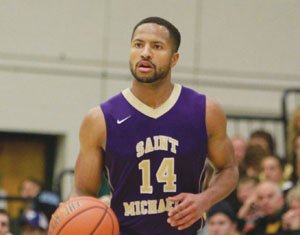 Mike Holton Jr. of Portland, has signed a professional contract to play basketball in Europe after turning in an extraordinary career at Saint Michael's College in Vermont.

The son of former Portland Trail Blazer Michael Holton Sr. and a former basketball standout at Sunset High School in Beaverton, he forged his own path to become the 5th highest scorer at St. Michael’s. The 6-foot-1 guard was the only player in school history with four 400-point seasons. He was named Northeast-10 Conference All-Conference three times.

Holton Jr. signed his first professional contract on July 23 to play with the Kapfenberg Bulls, one of the most successful teams of recent in the Austrian Basketball League, according to school officials. Kapfenberg is located southwest of the Austrian capital city of Vienna.

Holton was scheduled to join the team this month in advance of a season that begins in September and runs until April.