Legal team fires back after star is charged 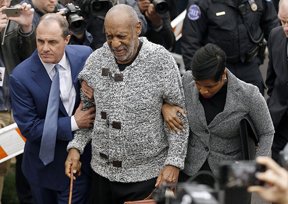 Bill Cosby is escorted by his attorneys into court for arraignment on a charge of sexual assault. (AP photo))

(AP) — Bill Cosby was charged Wednesday with drugging and sexually assaulting a woman at his home 12 years ago — the first criminal charges brought against the comedian out of the torrent of allegations that destroyed his good-guy image as America’s Dad.

The case sets the stage for perhaps the biggest Hollywood celebrity trial of the mobile-all-the-time era and could send the 78-year-old Cosby to prison in the twilight of his life and barrier-breaking career.

Prosecutors accused him of plying former Temple University employee Andrea Constand with pills and wine, then penetrating her with his fingers without her consent, while she was drifting in and out of consciousness, unable to resist or cry out.

The TV star acknowledged under oath a decade ago that he had sexual contact with Constand but said it was consensual.

Cosby's lawyer charged on Thursday that the prosecution against the comedian was politically motivated by Montgomery County District Attorney-elect Kevin Steele to make good on a campaign pledge.

"What we have is not the effectuation of justice. What we have is the fulfillment of a campaign promise," Monique Pressley said on ABC's "Good Morning America."

Cosby was arraigned Wednesday and released on $1 million bail.

The decision to prosecute came just days before Pennsylvania's 12-year statute of limitations for bringing charges was going to run out. It represents an about-face by the DA's office, which under then-District Attorney Bruce Castor declined to charge Cosby in 2005 when Constand first went to police.

Castor tried to reclaim his job as DA in the November election but lost to Steele in a hotly contested race in which the Cosby case played a central role.

Steele attacked Castor during the campaign for not prosecuting Cosby, running an ad that said: "Bruce Castor was not looking out for the victims." But Steele never said what he would do if he were elected.

After the charges came down, Cosby's attorney accused Steele of "playing political football" with Cosby's life. She told morning network shows that Steele made a promise and had to make good on it before the statute of limitations ran out.

Constand, who is now 42 and lives in Toronto, welcomed the charges, said her lawyer, Dolores Troiani. "She feels that they believe her, and to any victim, that is foremost in your mind: Are people going to believe me?" Troiani said.

On Wednesday, Cosby, holding a cane, walked slowly and unsteadily into court on the arms of his attorneys, tripping on a curb as he made his way into the building. Inside, he seemed to have trouble seeing the paperwork and finding the place to sign, and his lawyers helped him hold the pen.

Cosby also faces a raft of defamation and sexual-abuse lawsuits filed in Massachusetts, Los Angeles and Pennsylvania. But in nearly every case, it is too late to file criminal charges.

One exception: a 2008 case involving a model at the Playboy Mansion in Los Angeles. It is still under investigation by police.

A key question if the Pennsylvania case goes to trial is whether the judge will allow testimony from some of those other accusers to show a pattern of "bad acts." The judge could decide such testimony would be unfair to Cosby.

Cosby in 1965 became the first black actor to land a leading role in a network drama, “I Spy,” and he went on to earn three straight Emmys. Over the next three decades, the Philadelphia-born comic created TV’s animated “Fat Albert” and the top-rated “Cosby Show,” the 1980s sitcom celebrated as groundbreaking television for its depiction of a warm and loving black family headed by two professionals — one a lawyer, the other a doctor.

He was a fatherly figure off camera as well, serving as a public moralist and public scold, urging young people to pull up their saggy pants and start acting responsibly.

Constand, who worked for the women’s basketball team at Temple, where Cosby was a trustee and proud alumnus, said she was assaulted after going to his home in January 2004 for some career advice.