International Film Festival an opening to the world 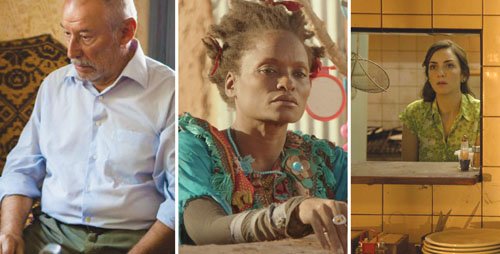 Oscar nominated ‘Timbuktu’ is a powerful African melodrama about a community in northern Mali under jihadist occupation, one of 150 films from 52 countries at the Portland International Film Festival. ‘Wild Tales’ is a collection of six darkly-comedic short stories and is nominated for an Oscar for Best Foreign Language film. The Argentine production opens the Portland International Film Festival on Thursday at the Regal Fox Tower 10, 846 S.W. Park Ave., which is also the site of the festival’s opening night party. ‘The Japanese Dog,’ from Romania tells the story of an elderly man in the countryside whose recent loss brings him back in touch with an estranged son who returns home for a visit with his Japanese wife and small son. It’s scheduled for three screenings at the Portland International Film Festival.

Every February, I travel the world--and so can you, or virtually so, because the Portland International Film Festival offers the most culturally diverse film event of the year, beginning this week. You can choose from 150 films (97 features and 60 shorts) from 52 countries. One of the true pleasures of the event is that it brings out local folks with ties all over the world; I savor the pleasure of hearing so many different languages spoken as I wait for the films to begin.

The festival’s opening night film is "Wild Tales," an Argentine production that presents six darkly-comedic short stories and is nominated for an Oscar for Best Foreign Language Film. I caught a preview screening of the other Oscar-nominated foreign language film on offer, "Timbuktu," a powerful depiction of a community in northern Mali under jihadist occupation. It’s a rare opportunity to see a film by an African director (Abderrahmane Sissako, who lives in France), and his depiction of the effects of Islamic extremism on one community is subtle and visually poetic and so visceral that I actually involuntarily cried out during one scene. It's a contender for my list of the best films of 2014--and my yearly 10-best list nearly always includes a film or two that I see first at PIFF. Timbuktu will play on Feb. 7 and 10.

I also have caught two other films in preview screenings so far. "10,000 Km," from Spain, focuses on a Barcelona couple who set out to live apart for a year while one of them pursues a career opportunity in Los Angeles. A lot of the film's visual focus is on the range of electronic communications that tie the two as they attempt to stay connected over Skype and text. But what attracted to me was how perceptive the film was about intimacy itself; an apparently quite connected and compatible couple in a seven-year relationship find that their intimacy begins to disintegrate rather quickly with physical distance. How many relationships would survive such circumstances? Why and in what way would they survive? The film is full of insights about the thin line that separates a life together and a life apart. It plays on Feb. 8 and 18.

"The Japanese Dog," from Romania, didn't intrigue me in the same way. It's a quiet tale of a grouchy older man who lives in a small village and is adjusting to the loss of his wife and many of his belongings in a flood. He appears stuck in his curmudgeonly rut until his estranged son returns home for a visit with his Japanese wife and small son. Their scenes of reconnection are quietly charming but what some have called subtlety struck me as a little thin and not very rich in understanding about what drove father and son apart. It is scheduled to play three times, on Feb. 6, 11, and 19.

Some of the films I'm especially looking forward to early in the festival are "'71," a thriller set in Belfast during the worst part of the Troubles, in which Jack O'Connell (star of "Unbroken”) plays a soldier trapped and unarmed in hostile territory; "Clouds of Sil Maria," a French film starring Juliette Binoche as a middle-aged actress returning to a play that made her famous, but this time playing the older of two key roles (having built her career on the younger character); "The Tribe," a Ukrainian film that won prizes at the Cannes Film Festival and is presented only in sign language with no translation; "Hotel Nueva Isla," a documentary about a formerly luxurious old Havana hotel that now houses people living on the fringes of Cuban society; "Underdog," about a young Swedish immigrant working as a domestic in Norway; "Phoenix," a German film about a concentration camp survivor returning to Berlin to find the husband she still loves who may have betrayed her to the Nazis; and "The Duke of Burgundy," an erotic melodrama from the United Kingdom.