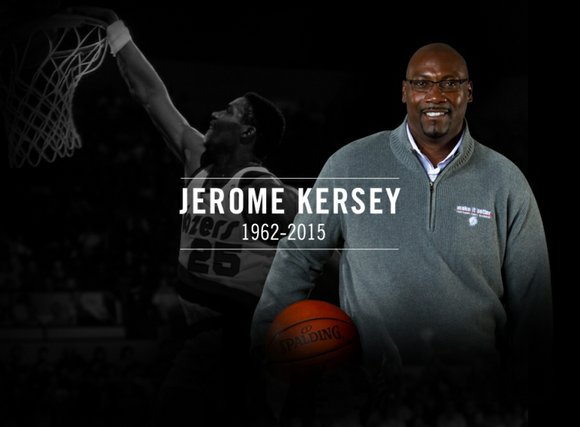 Jerome Kersey, a beloved former player with the Portland Trail Blazers and still a member of the team as an ambassador, died Wednesday at the age of 52 Photo courtesy of the NBA

The community is invited to join family, friends, teammates and colleagues to pay respects to the late Blazer Jerome Kersey during a celebration of life ceremony on Monday, March 2 at 4 p.m. at Veterans Memorial Coliseum.

Kersey, a beloved figure and one of the most prolific Portland Trail Blazers, Kersey, died Feb. 18 at age 52. The state medical examiner determined the death was caused by a blood clot that traveled from his left calf to his lungs.

The Portland Trail Blazers honored Kersey with an emotional 25 seconds of silence before their game against the Memphis Grizzlies on Sunday night. Kersey, wore No. 25 during his 11-year tenure in Portland, and guard Steve Blake switched his jersey number from 25 to 5 to honor him. The entire team will wear special patches on their jerseys for the rest of the season.

For the national anthem, the Blazers showed a clip of Kersey performing a duet of the song before a game in 1989 on the video scoreboard. The crowd at the Moda Center responded with a standing ovation.

Outside the Moda Center, there was a growing memorial to Kersey surrounding a "Rip City" sculpture. Inside, the players wore T-shirts with emblazoned with "JK25" during warmups .

A long-time resident of Portland after his 17-year NBA career, Kersey was employed by the Trail Blazers as Director of Alumni Relations as part of the team’s Social Responsibility Department.

Known for his broad smile and warm manner, Kersey appeared the day before his death with fellow former Blazer greats Terry Porter and Brian Grant at Madison High School in northeast Portland in celebration of African American History Month.

“We lost an incredible person and one of the most beloved players to ever wear a Trail Blazers uniform,” said Trail Blazers Owner Paul Allen. “My thoughts and condolences are with the Kersey family. He will be missed by all of us. It’s a terrible loss.”

“We’re shocked to lose such a great member of our Trail Blazers family,” said Trail Blazers President and CEO Chris McGowan. “It is indeed a sad day for our organization, the city of Portland and the NBA. Jerome will be remembered not only for his incredible contributions on the court, but his tremendous impact in our community.”

Kersey was part of the great early 90s Portland nucleus that led the Trail Blazers to the NBA Finals in 1990 and 1992. He ranks fifth on the team’s all-time scoring list (10,067) and third in rebounds (5,078). He continued his career with Golden State, L.A. Lakers, Seattle, San Antonio and Milwaukee, and he won an NBA Championship with the Spurs in 1999.

He lived with wife Teri in Lake Oswego.

In lieu of flowers, donations can be made in honor of Jerome Kersey to the Boys & Girls Clubs of Portland Metropolitan Area; Caddies 4 Cure; and the Children’s Cancer Association. Cards, letters and expressions of condolences should be mailed to The Jerome Kersey Family, c/o Portland Trail Blazers, One Center Court, Suite 200, Portland, OR 97227.