Torture Doesn’t Save Lives, It Costs Them

Knowledge that damages the soul 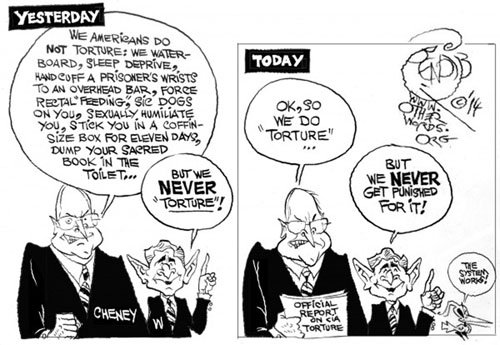 Torture doesn't save lives, it costs them.

Thanks to the Senate’s report on CIA torture, Americans should now realize that there was nothing “enhanced” about the Bush administration’s so-called “enhanced interrogation techniques.”

These tactics were more than just cruel and degrading — they were also harmful. Far from providing intelligence that saved lives, these techniques produced unreliable intelligence. And they’ve associated our great country with disgusting abuses like “rectal feeding.”

The public response should’ve been dismay and disgust. Instead, America yawned. A recent Pew poll found that a majority of Americans still believe that these interrogation methods were justified and provided live-saving intelligence.

In 1995, I swore an oath to support and defend our Constitution— a document proclaiming basic human rights and prohibiting the U.S. government from inflicting “cruel and unusual punishment.”

I’m writing this as a private citizen, so my opinions don’t necessarily reflect those of the U.S. military. But I do know this: Torture is an extremely poor method for extracting reliable intelligence.

I deployed to Iraq soon after the fall of Saddam’s regime. My battalion was responsible for all tactical interrogations in Baghdad.

Luckily, I had good leaders. Four days after taking command, Brigadier General Martin Dempsey, the commanding general of our supported division, signed a policy prohibiting the harsh treatment of prisoners.

But war can make people desperate. In August 2003, our headquarters sent out an email declaring that “casualties are mounting” and that the “gloves are coming off regarding these detainees.” It closed by asking for a “wish list” of harsh interrogation methods to be considered for approval.

My boss, Major Nathan Hoepner, had a different message. “We have never considered our enemies justified in doing such things to us,” he wrote military intelligence units throughout Iraq. “We are American soldiers, heirs of a long tradition of staying on the high ground. We need to stay there.”

Although my unit’s interrogators never used the CIA’s “enhanced” interrogation techniques, those at the Abu Ghraib military prison did. There, dehumanizing tactics grew increasingly degraded, eventually twisting into a torture scandal that shamed our nation and became a rallying cry for terrorist recruiters.

It still upsets me to see those Abu Ghraib photos, and not just because they show Americans torturing prisoners. They bother me because I played an unwitting role in this torture.

To ensure that no stone was left unturned, I routinely asked Abu Ghraib to interrogate my division’s former prisoners. Because of me, Iraqis — some no doubt innocent — suffered abuses like forced nudity, cold temperatures that led some to develop hypothermia, and the threat of attack by military working dogs.

This is the kind of knowledge that damages the soul.

Making things worse is knowing that we received no useful information from Abu Ghraib whatsoever. That facility has got to have the worst interrogators in the world, I often thought — not realizing what those interrogators were doing and why they were so ineffective.

What Abu Ghraib did do effectively was to pour fuel on the fire of Iraq’s insurgency. My division’s deployment was extended to fight this fire. During this extension, I lost a friend to one roadside bomb and had six of my soldiers injured — two severely — by another.

America, please wake up: Torture is illegal, immoral, and unconstitutional. And it doesn’t save lives — it costs them.

If any issue in our great nation deserves bipartisan consensus, it’s this: We should never again be a nation that tortures.

Lieutenant Col. Douglas A. Pryer is an active-duty Army officer and the author of the book, The Fight for the High Ground: The U.S. Army and Interrogation during Operation Iraqi Freedom, May 2003 – April 2004.