A power luncheon for young women of color 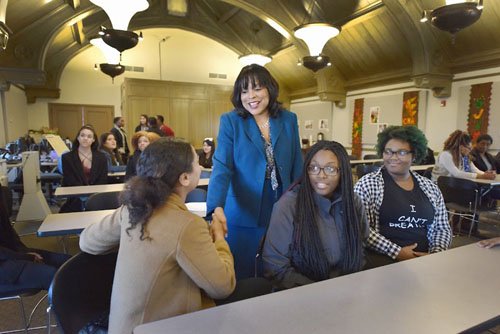 Dozens of high schoolers from Portland’s black community are learning about leadership with a powerful line-up of women.

Held at the nearby North Portland Library, the gathering was an opportunity for young women to make connections and explore career paths with local leaders of color.

“I asked myself an important question,” said Smith. “Do I do enough for young women of color? And the answer was no. So, I decided I need to get out into the community and do more. I wanted to bring some of the people I know and let them be your people for the day.”

Students attended the networking lunch with women from a variety of backgrounds including public service, education, health, law, media and communications, corporate business, and government.

All shared encouraging and powerful anecdotes about their career paths and the successes and setbacks along the way.

“When I was running for office, I didn’t hear no,” explained an energetic Senator Carter. “I heard yes.”

“Grit and an inquisitive nature -- those are the qualities companies are looking for,” explained Howard.