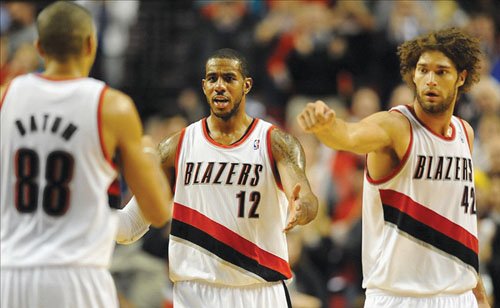 (AP) — LaMarcus Aldridge announced Saturday that he will sign with San Antonio in a move that will align him with Tim Duncan and Kawhi Leonard to form what would figure to be among the league's most-formidable frontcourts.

"I'm happy to say I'm going home to Texas and will be a Spur!!" Aldridge, a Dallas native, posted to his verified Twitter account. "I'm excited to join the team and be close to my family and friends."

The Spurs could not comment because of the league's offseason moratorium. Aldridge, who spent his first nine seasons with the Portland Trail Blazers, will be eligible to sign his new deal Thursday.

He met with several teams, all who were offering what the Spurs did: $80 million for four years. The Los Angeles Lakers tried to woo him to play alongside Kobe Bryant. The Mavericks tried to sell him on coming home. Houston and Phoenix made pitches as well, and Pat Riley flew to Los Angeles to try to talk Aldridge into leaving the loaded Western Conference, coming East and joining the Miami Heat.

It ushers in a new era for Portland. Damian Lillard got a new $120 million deal in recent days to stay with the Blazers, but Wesley Matthews (Dallas), Nic Batum (Charlotte), Arron Afflalo (New York) and Robin Lopez (New York) are heading elsewhere.

Now Aldridge, the second-leading scorer in Portland history behind only Clyde Drexler, is gone as well.

Aldridge averaged a career-high 23.4 points and also grabbed 10.2 rebounds per game while playing with an injured thumb last season for the Blazers. And last year he added a new dimension to his game - the 3-pointer, making 37 of them after making a total of 24 in his first eight seasons combined.