Rousing eulogy touches on racial past and present 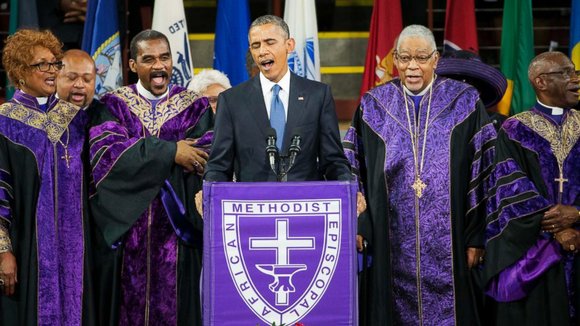 President Obama delivered the eulogy and led in the singing "Amazing Grace" at the funeral Friday of Rev. Clementa Pinckney, one of the nine people killed June 17 at Emanuel African Methodist Episcopal Church in Charleston, S.C.

(AP) -- President Barack Obama used his eulogy for a slain pastor to deliver an unvarnished lecture on America's racial history Friday, and then boldly sang "Amazing Grace," a spiritual meant to summon hope in the darkest of times.

Obama also called for actions to reduce gun violence, to eliminate poverty and job discrimination, and said the Confederate battle flag — long a symbol of Southern pride — must be removed from places of honor.

"For many — black and white — that flag was a reminder of systemic oppression and racial subjugation. We see that now," he said.

The president came to eulogize the Rev. Clementa Pinckney, a state senator whose church was founded by the leader of a failed slave revolt and burned to the ground by angry whites in 1822. After the Civil War, the Emanuel African Methodist Episcopal Church led efforts to expand equal rights in the South, hosting Martin Luther King Jr. during campaigns in South Carolina.

Pinckney himself came from a long line of preachers and protesters, and the eight people slain beside him drew no distinctions between their work in church and their efforts to improve society, Obama said.

"We do not know whether the killer of Rev. Pinckney and eight others knew all of this history," the president said. "But he surely sensed the meaning of his violent act. It was an act that drew on a long history of bombs and arsons and shots fired at churches; not random, but as a means of control, a way to terrorize and oppress."

"An act that he imagined would incite fear, and incrimination, violence and suspicion. An act he presumed would deepen divisions that trace back to our nation's original sin," Obama continued, his voice rising in the cadence of the preachers who preceded him.

"Oh, but God works in mysterious ways!" Obama said, and the crowd rose to give him a standing ovation. "God has different ideas!"

Obama spoke plainly about the ugliness of America's racial history — from slavery to the many ways minorities have been deprived of equal rights in more recent times. Taking down the Confederate flag is a righteous step, "but God doesn't want us to stop there," he said.

The president wrapped up the four-hour funeral in song, belting out the first words of "Amazing Grace" all by himself. Ministers behind him quickly stood up and began singing, too, and the choir and organist and many in the audience of thousands joined in.