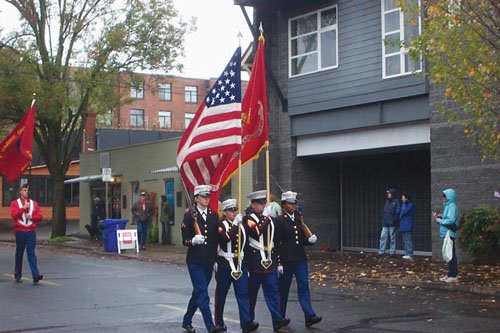 You’re invited to celebrate veterans in Vancouver and Portland thanks to local organizations who have made a point to honor them in observance of Veterans Day.

On Saturday, Nov. 7 the Fort Vancouver National Trust will host their 29th annual parade at Fort Vancouver. The parade begins at 11 a.m., rain or shine. The ceremony preceding the parade will begin at 10 a.m. on the Marshall House lawn, and will feature keynote speaker Colonel Paul Fitzgerald, commander of the 142nd Fighter Wing of the Oregon Air National Guard, and honor Parade Grand Marshal Pat Jollota.

On Tuesday, Nov. 10, at 12 noon, Clark College invites the community to join them on the South Lawn of their Vancouver campus to form a patriotic shield and capture an aerial drone photograph of the moment.

And on Wednesday, Nov. 11, the official date for Veterans Day, northeast Portland will host a Veterans Day Parade at 9:45 a.m. The parade assembles on Northeast 40th and Tillamook and proceeds along 40th turning east onto Sandy Boulevard and concluding at the flag pole in front of Ross Hollywood Chapel at 48th and Sandy.