Turing back the clock on voting rights 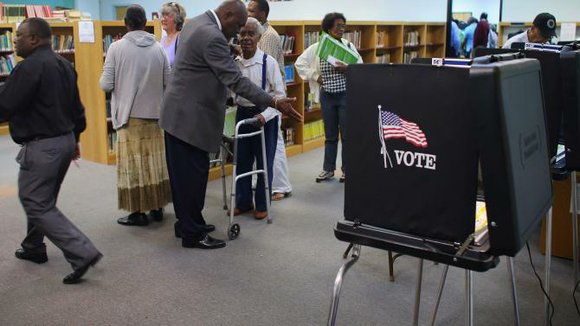 Barbara Arnwine has long been sounding the alarm about 21st century efforts to turn back the clock on voting rights. She recently founded the Transformative Justice Coalition after serving for many years as executive director of the Lawyers’ Committee for Civil Rights Under Law and head of its Election Protection efforts, the nation’s largest non-partisan voter protection coalition.

Under her leadership the Lawyers’ Committee created a “Map of Shame” highlighting states where new or pending legislation threatens to suppress the right to vote—which, as she says, remains under attack in 2015 by forces who still believe the right to vote should stay in the hands of a precious few.

Many of the new laws making it more difficult to vote appear to be cynical attempts to blunt the political power of rapidly growing populations of people of color as our nation confronts the changing reality of who is a “minority” and who is a “majority.” Others specifically appear to target younger voters, the poor, and the elderly.

Alabama made some of the latest headlines for its decision to close a wave of driver’s license offices in disproportionately black, rural areas in October, leaving eight out of the 10 counties with the highest percentage of non-white registered voters without a Department of Motor Vehicles—making it much more difficult for residents in those counties to get their licenses and fulfill the state’s strict photo ID voter requirement. Voter ID laws are just one of the dangerous new kinds of laws threatening to disenfranchise voters. The problem they allegedly address, voter identity fraud, has been documented to be nearly nonexistent. But people of color, immigrants, poor people, and old and young voters, including students attending college away from home, are less likely to have the forms of identifications required by states’ laws and more likely to have trouble obtaining birth certificates, paying fees, or going through other hoops.

Not even voiceless children are exempted from assault. The Children’s Defense Fund has filed a friend of the court brief in the U.S. Supreme Court case, Evenwel v. Abbott, in which some citizens are suing the state of Texas seeking to change the answer to a fundamental democratic question: Who gets counted as a person when states determine proportional representation?

There is a constitutional principle that elected officials represent every individual in their district, including non-voters, and the majority of states currently count all people who live in a district when drawing district boundaries. Most people are represented directly because they are voters, but those who can’t vote—children, non-citizens, formerly incarcerated people who have not had their voting rights restored, and others who are disenfranchised—are all represented indirectly.

But the Evenwel case is challenging the state of Texas’s current traditional use of total population measure for redistricting in its state Senate, and seeks instead to count only citizens of voting age when drawing districts. Attacking that long-standing practice is part of a broader effort to diminish the rights of certain—especially non-white—groups and powerless groups, including children, reminiscent of other efforts to suppress voting rights. Children’s health, education, and economic security depend on healthy state budgets and good public policies. Our nation has a vital stake in the well-being of its children. But all these efforts to subvert the democratic process continue and we must fight to stop them in every form.