More than just thoughts and prayers 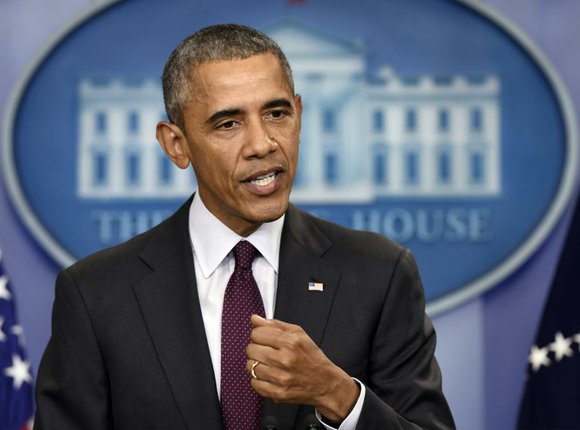 President Barack Obama speaks Thursday evening at the White House about the shooting that killed 10 people at Umpqua Community College in Roseburg earlier in the day. (AP Photo)

President Obama expounded on the importance of gun control, legislation, and the importance of political action surrounding Thursday's mass shooting at Umpqua Community College in Roseburg, Oregon. The full speech is reprinted below.

President Obama Delivers a Statement on the Shooting in Oregon

President Obama delivers a statement on the shooting at a community college in Roseburg, Oregon. October 1, 2015.

"There's been another mass shooting in America — this time, in a community college in Oregon.

That means there are more American families — moms, dads, children — whose lives have been changed forever. That means there's another community stunned with grief, and communities across the country forced to relieve their own anguish, and parents across the country who are scared because they know it might have been their families or their children.

I've been to Roseburg, Oregon. There are really good people there. I want to thank all the first responders whose bravery likely saved some lives today. Federal law enforcement has been on the scene in a supporting role, and we've offered to stay and help as much as Roseburg needs, for as long as they need.

In the coming days, we'll learn about the victims — young men and women who were studying and learning and working hard, their eyes set on the future, their dreams on what they could make of their lives. And America will wrap everyone who's grieving with our prayers and our love.

But as I said just a few months ago, and I said a few months before that, and I said each time we see one of these mass shootings, our thoughts and prayers are not enough. It's not enough. It does not capture the heartache and grief and anger that we should feel. And it does nothing to prevent this carnage from being inflicted someplace else in America — next week, or a couple of months from now.

We don't yet know why this individual did what he did. And it's fair to say that anybody who does this has a sickness in their minds, regardless of what they think their motivations may be. But we are not the only country on Earth that has people with mental illnesses or want to do harm to other people. We are the only advanced country on Earth that sees these kinds of mass shootings every few months.

Earlier this year, I answered a question in an interview by saying, "The United States of America is the one advanced nation on Earth in which we do not have sufficient common-sense gun-safety laws — even in the face of repeated mass killings." And later that day, there was a mass shooting at a movie theater in Lafayette, Louisiana. That day! Somehow this has become routine. The reporting is routine. My response here at this podium ends up being routine. The conversation in the aftermath of it. We've become numb to this.

We talked about this after Columbine and Blacksburg, after Tucson, after Newtown, after Aurora, after Charleston. It cannot be this easy for somebody who wants to inflict harm on other people to get his or her hands on a gun.