Scoping out the best at Full Frame 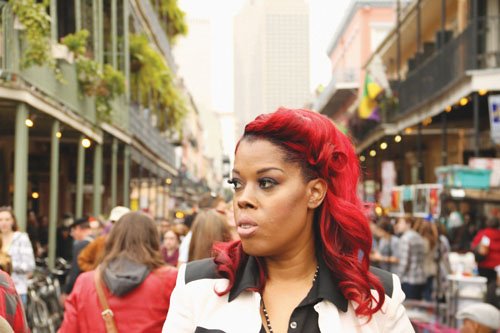 Samantha Montgomery in “Presenting Princess Shaw,” in inspired film about a talented singer who became an Internet sensation after toiling in obscurity for years. Magnolia Pictures

I just made my annual sojourn to Durham, North Carolina for the Full Frame Documentary Film Festival, the premier documentary film festival in the U.S. It's a highlight of my year and gives me a chance to scope out some of the best documentaries to watch out for. I saw a terrific slate of films, all worth seeing. Here's what I saw, in order of my preferences--and where I can, I've noted distribution information.

12. "Sonita" won a filmmaker award at Full Frame and an audience award at the Portland International Film Festival. It follows the story of Sonita Alzadeh, an Afghan teenager living illegally in Iran and attending a school for refugees who desperately wants to be a rapper. Among the obstacles she faces? She lives in a culture that forbids women from singing publicly, that sees her as useful only for obtaining a valuable marriage contract that will help her desperate family, and that severely limits any kind of self-expression. The filmmaker ends up walking some interesting lines as Sonita enlists her for help in getting to the U.S. and in navigating her mother's disapproval--but it is a compelling window into Sonita's culture and into the ways that even the most oppressed teenagers struggle to find their voices. It is slated for a theatrical release in late May.

13. "Behemoth" has garnered awards internationally and is a devastating depiction of environmental degradation wrought by coal mining in Inner Mongolia. The director takes a poetic approach to the subject, drawing a parallel to Dante's Inferno, and I must say, I did feel as though I was watching hell for 90 minutes. The director lingers and finds the scope and angles for depicting what is happening to a formerly lush landscape in a way that makes your heart ache, as does his focus on the exertions of the people who perform the agonizing and hellish work of moving coal and doing other senseless acts. You can almost feel their bodies breaking down--and sure enough, many such workers become very ill and are not well-supported by industry or the Chinese government. The power of the images here is best experienced on the big screen, and there is no mistaking the importance of bearing witness to this scale of human folly.

14."Call Me Marianna" has achieved awards recognition in Europe and at Full Frame, where it won a new filmmaker award, and examines the sex reassignment journey of a woman in Poland. Although its pace drags a bit and the accompanying music is more annoying than effectively portentous, the film is nevertheless an interesting window into one woman's experience, which involves the loss of relationships and even a court battle, as well as a cascade of health problems. I appreciated the opportunity to witness how a non-famous person in central Europe navigates these particular treacherous waters.

15."Raising Bertie" is the fruit of the filmmaker's six-year journey with three young black men in rural Bertie County in North Carolina, trying to launch independent lives in the face of limited opportunities, economic hardship, and a paucity of inspiration and hope from adults around them. The film started as an exploration of an alternative high school founded by a determined powerhouse of a local woman, but the school closed early in the filming for lack of funding. The young men themselves are certainly worthy of the filmmaker's attention, and they do manage to survive, but I would not call it thriving. The film is an opportunity to fill out some details of your picture of the challenges faced by young men in communities like these; if you are paying attention at all, the legacy of slavery is hard to miss.

16."Gleason" follows the story of Steve Gleason, a Spokane native and popular former player for the New Orleans Saints who was diagnosed with ALS at age 34, just as he and his wife Michel were starting a family. The couple is as genuine, courageous, and good-hearted as any two young people who have faced such unthinkable challenges could possibly be, and Gleason has led significant advocacy on behalf of ALS patients--but I also think the film could have benefited from a more mature directorial perspective and perhaps with a bit more time for the story to unfold. ALS is as brutal as it gets; I suspect it would be an unusual human being who could do this story justice as a director. That said, it won special mention from the Grand Jury at Full Frame, and Gleason and his family are the most sympathetic subjects imaginable. The film will be released theatrically in July.

In addition to the feature-length films I saw, I caught excellent two shorts. "I, Destini" is an animated short co-directed by a Durham teenager who reflects on the differences between the experience of her African American family (including a brother accused of a serious crime) and her white classmates. Her parents helped her with the project, which began when she was 13, including by working on the animation itself. There is something profound about a family working through trauma by drawing together their response to what happened--and the film is quite powerful. If you're interested in screening the film, visit idestini.info, where you can also watch a clip of it. "The Black Belt" examines the after-effects of the Alabama legislature's decision in 2015 to close 31 DMV locations in predominantly black communities to save $100,000 for the state. Residents must now obtain voter ID cards from ramshackle mobile units that visit those communities very rarely. The film documents a particularly clear example of institutionalized oppression. Watch for it on the website for Field of Vision, theintercept.com/fieldofvision.