Jury rules in favor of protester 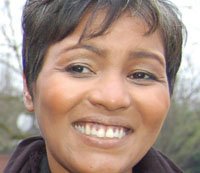 Portland activist Teressa Raiford was unanimously acquitted Thursday on a charge of criminally obstructing traffic for a protest last year on the one year anniversary of the death of Micheal Brown in Ferguson, Mo.

The not guilty verdict was seen as evidence of police bias and abuse of power by activists for police reform in Portland. The American Civil Liberties Union of Oregon applauded the Portland jury’s decision.

Raiford maintained in a three-day trial that she was lawfully protesting last August when police officers caught her by surprise and suddenly crossed Southeast Division near 82nd Avenue and arrested her. She was leading a crowd of about 100 protesters in chants at the time.

Raiford is the founder of the Don’t Shoot PDX movement which began after Brown’s death by a white police officer in Missouri, and mirrors many of the ideals for justice in the Black Lives Matter movement.