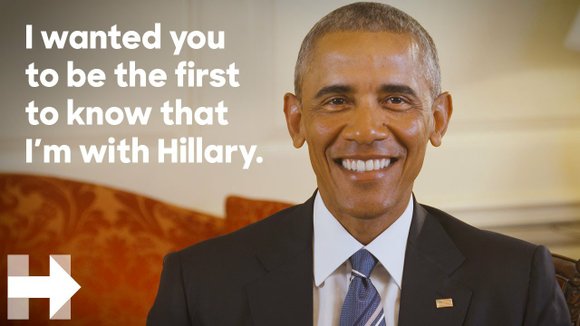 President Barack Obama formally endorsed Hillary Clinton’s bid for the White House on Thursday, praising his former secretary of state’s experience and grit, and urging Democrats to unite behind her in the fight against Republicans in the fall.

‘‘Look, I know how hard this job can be. That’s why I know Hillary will be so good at it,’’ Obama said in a web video circulated by the Clinton campaign. ‘‘I have seen her judgment. I have seen her toughness.’’

Obama called for unity among Democrats and vowed to be an active force on the campaign trail.

As it circulated the Obama video, the Clinton campaign announced their first joint appearance on the campaign trail will be Wednesday in Green Bay, Wisconsin. The campaign said Obama and Clinton will discuss building on the progress made during his presidency ‘‘and their vision for an America that is stronger together.’’

Sanders emerged from a meeting with Obama earlier Thursday and inched closer in that direction. Although he stopped short of endorsing Clinton, the Vermont senator told reporters he planned to press for his agenda at the party’s July convention and would work with Clinton to defeat Trump.

‘‘Needless to say, I am going to do everything in my power and I will work as hard as I can to make sure that Donald Trump does not become president of the United States,’’ he said.