Honored as fearless man of principle 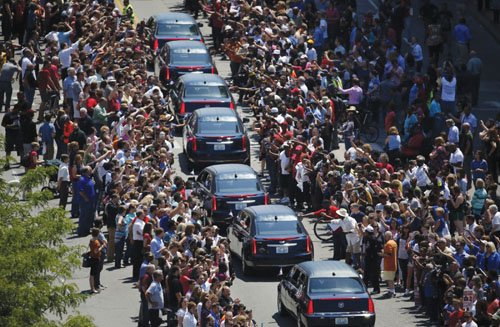 (AP) - The Greatest was laid to rest in his hometown Friday after an all-day send-off that was a lot like Muhammad Ali himself - serious at times, but also exuberant, bracingly political, and funny.

Ali made one final journey through the city he adored via a fist-pumping funeral procession through the streets of Louisville. The burial was followed by a star-studded memorial service where the boxing great was eulogized as a brash and wildly charismatic breaker of racial barriers.

"He was a tremendous bolt of lightning, created by Mother Nature out of thin air, a fantastic combination of power and beauty," comedian Billy Crystal said in an address that had the crowd of about 15,000 laughing at nearly every turn.

The more than three-hour memorial capped nearly a full day of mourning in Louisville for Ali, the three-time heavyweight champion of the world who died last week at 74 after a long battle with Parkinson's disease.

An estimated 100,000 people holding signs and chanting, "Ali! Ali!" lined the streets as a hearse carrying his cherry-red casket made its way past his childhood home to Louisville's Cave Hill Cemetery, where a private burial service was held.

"He stood up for himself and for us, even when it wasn't popular," said Ashia Powell, waiting to catch a glimpse of the funeral procession for the man the city once knew as Cassius Clay, before he converted to Islam and shed what he called his slave name.

In eulogies that were sometimes laced with political barbs in this presidential campaign season, speaker after speaker paid tribute to Ali as a fearless man of principle, someone who went from being one of the most polarizing figures of the 20th century to one of the most beloved, a source of black pride and a symbol of professional excellence.

Kevin Cosby, pastor of a Louisville church, told the crowd that Ali "dared to affirm the power and capacity of African-Americans" and infused them with a "sense of somebodiness." He likened Ali to such racial trailblazers as Jesse Owens, Rosa Parks and Jackie Robinson.

Rabbi Michael Lerner, a political activist and editor of the Jewish magazine Tikkun, brought the crowd to its feet four times with a fiery speech in which he referred to Ali's refusal to be drafted during the Vietnam War - a stand that cost him his boxing title.

"Ali stood up to immoral war, risked fame to speak truth to power. The way to honor him is to be like him today," Lerner said, railing against anti-Muslim bigotry, drone attacks, the gap between rich and poor, and racist policing.