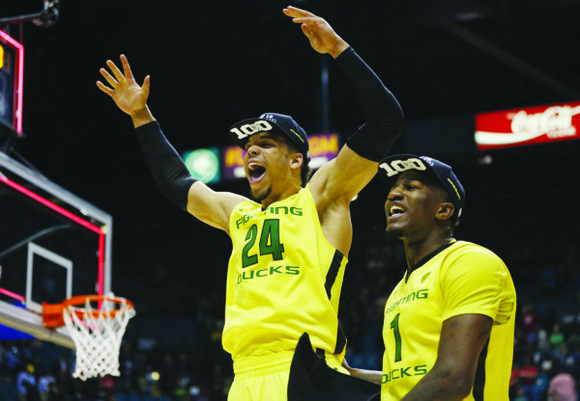 Both Oregon and Oregon State won invites to the NCAA basketball tournament Sunday, a first for both teams playing in the same championship series, while the women’s team at Oregon State earned a No. 2 seed in the NCAA women’s tournament.

At 28-6, the Ducks men’s basketball team is a No. 1 seed for the first time in school history. They won the Pac-12 Conference regular season championship and the Pac-12 Conference Tournament on Saturday in Las Vegas with an 88-57 rout of Utah. Oregon will open the national playoff series Friday in Spokane against either Holy Cross or Southern.

Oregon State is in the NCAA tournament for the first time since 1990 and in just the second year under head coach Wayne Tinkle. OSU is the No. 7 seed in the West and will play No. 10 seed VCU on Friday in Oklahoma City.

Tinkle was hired in spring 2014 to take over for Craig Robinson, first lady Michelle Obama's brother. Robinson spent six years at Oregon State but was never able to take the team further than the CBI tournament in the postseason.

The OSU women will open their NCAA tournament with a game Friday at home against 15th-seeded Troy.