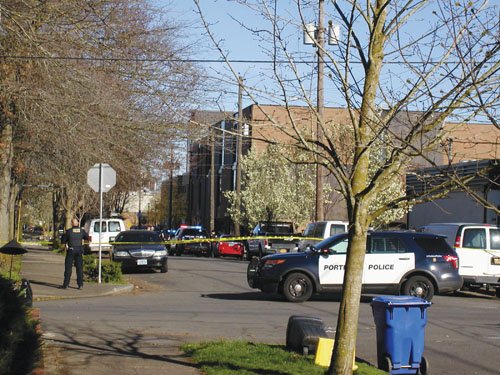 The Gang Enforcement Team from Portland Police cordon off a street to investigate a shooting on the north side of Portland Community College’s Cascade Campus. It happened around 4:30 p.m. on Thursday when a 20-year-old man was hit by gunfire near a sidewalk at North Jessup Street and Mississippi Avenue. Michael Grimmett

An 18-year-old male turned himself in to authorities on Friday to face charges that he shot another young man the day before on the north side of Portland Community College’s Cascade Campus.

Police believe the gunfire was generated from local gang activity and was not directed at anyone at the college. The police bureau’s Gang Enforcement Team was called to investigate along with a Gun Task Force which is continuing to investigate several incidents of gun violence citywide.

After he surrendered to police, Woodgery Gelin was charged with attempted murder, assault and unlawful use of a weapon. He’s accused of shooting a male in his early 20s near a sidewalk at North Jessup Street and Mississippi Avenue right next door to school buildings and a nearby Albina Head Start. The victim was taken to a Portland hospital for treatment where he survived his injuries.

Police said the shooting occurred around 4:30 p.m., a busy part of the day on north Portland campus. At least three school buildings were temporarily locked down as a safety precaution.