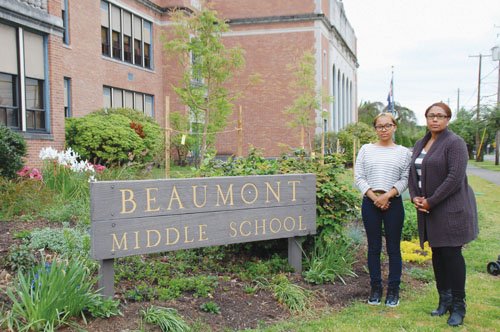 Getting arrested isn’t an act any child should ever have to experience, yet for a 12-year-old girl, that traumatically scarring experience became a reality.

An iteration of this story first broke a few weeks ago when it was reported that the young female was taken into custody for attacking another student and a substitute teacher at Beaumont Middle School.

While the date regarding the fight and the arrest two weeks later was accurate, the full details behind the incident were missing or false, according to the girl’s mother Mystique Pratcher and discipline records from the northeast Portland school.

Pratcher said she was shocked when Willamette Week published a story just two days after her daughter’s March 31 arrest. She calls foul on the school as the source for the media coverage because a police report had not been filed.

She says Beaumont has an issue of disciplining African American and Latino students more than anyone else, and claims that in her daughter’s case, the infractions have been for minor things, like being too loud.

“I’d already been having some issues with students being treated different because of their race at Beaumont,” she told the Portland Observer. “Emaujah had 10 referrals and all of them were for being loud in the hallway, during passing times. Not being loud in the classroom, not being disrespectful to staff -- for talking too loud,” she said.

Pratcher said her daughter and another student got into a mutual altercation on March 18. Each student was suspended for the spat, yet only Emaujah was taken into police custody.

Emaujah was described as the aggressor in the original report, which did not mention the other student’s full level of involvement. Both the principal and vice principal of the school, Harriette Vimegnon and Ed Krankowski, wrote in follow-up correspondence feeling the first report was a poor representation of the actual situation.

The amended discipline statement has some facts in her daughter’s favor, including an acknowledgment that the other student swung at her first and the fact that another student present had shouted for Emaujah to be “left alone.” A description of Emaujah calling out that she wanted to “scrap” with the other student involved was removed.

“Why would someone say ‘Leave Emaujah alone’ if my daughter was being the aggressor?” Pratcher asks, “Emaujah has never been in trouble for fighting at Beaumont.”

Neither the original nor the revised discipline form stated anything about Emaujah striking the substitute teacher.

“I took her to school at 9 a.m. and at about 9:45 a.m. I get a call from Emaujah saying ‘Mom, they’re trying to arrest me! I didn’t do anything!’ And then the phone hangs up,” Pratcher recalls. “So I’m calling the office trying to figure out what’s going on [and when someone answers] I hear her screaming and crying in the background.”

When Portland police came to Beaumont on the day of the arrest, Emaujah was then handcuffed and transported to a juvenile facility where she took a mugshot photo and was fingerprinted.

Upon returning to school, her daughter received additional discipline referrals for miscellaneous inane reasons, Pratcher said, the last of which led to her permanent separation from the school.

On April 15, she received an email from Principal Vimegnon saying that her daughter had been suspended in order to investigate grounds for expulsion. The listed the reasons for her suspension as “open defiance,” “insubordination” and “willful disobedience.”

Pratcher is upset that the final incident that got her daughter into trouble was for having a cell phone on her desk in math class, not in use, but for refusing to hand it over to her teacher when asked.

Principal Vimegnon said Beaumont does have a rule allowing students to have cell phones for academic reasons – such as calculating – yet it was deemed by Emaujah’s teacher that her intentions were non-academic.

Pratcher said if her daughter recorded a video with her phone, then everyone would believe her, but says the school is so stern, it wants to keep phones away from students.

For students at risk of expulsion, a hearing between the family and school officials is held to determine a final course of action. Emaujah’s hearing was held at an offsite location.

The over two hour long meeting addressed some of the issues at hand, yet didn’t tackle any of the questions both Pratcher and other organization members also present at the meeting had about Beaumont’s conduct. The only real conclusion reached was that Emaujah’s behavior did not constitute grounds for expulsion.

Despite the school’s decision to keep Emaujah at Beaumont, both Pratcher and her daughter feel uncomfortable with the school’s practices and have chosen to remain at great distance.

“What student would want to come back after being treated like this? There are things happening in the school that need to be addressed. My daughter is being traumatized and arrested under a false report, like why is that not being addressed? The school is being treated like a juvenile delinquency center, but only to specific students,” Pratcher said. “They’re just after Emaujah, trying to make it seem like she’s a ‘problem child.’ It’s classical conditioning. They know if they approach in a certain way that you’re going to respond in a certain way, and then you’re going to get a consequence.”

Pratcher plans to take this case to court on terms of defamation of character. Her frustration grows from not getting an adjudication hearing or a formal petition regarding the case, even after three attempts to contact the juvenile facility.

She’s been told the district attorney has not yet responded to the juvenile facility’s request, leaving the exact reasoning for her daughter’s arrest still unanswered. As it stands, there are still no official charges against her daughter.

“Somebody else needs to be held accountable. No one is being held accountable for what they did. I can’t trust anybody. I’m the only person that can advocate for her. She doesn’t know what’s going on, she’s 12,” Pratcher said.

Though Pratcher is weary, she states that both her and her daughter have a team of family and community members supporting them.

As for Emaujah, she plans to begin her 8th grade year at another local middle school and remain running track.