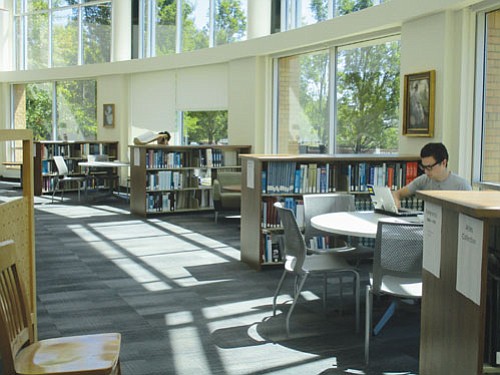 The community is invited to an open house on the Portland Community College Cascade Campus, 705 N. Killingsworth St., on Tuesday, Nov. 15. from 4 p.m. to 7 p.m. to tour its newly remolded library (above) and celebrate the completion of other new services and resources as part of a multi-year, $58 million construction project.

Portland Community College’s Cascade Campus has finished its second major expansion over the past two decades and is inviting friends and neighbors to join them to celebrate the transformation.

On Tuesday, Nov. 15, from 4 p.m. to 7 p.m., a Community Open House will take place in the new Cascade Campus Library, 705 N. Killingsworth. The open house will mark the official inauguration of a completely remolded library and complete a 2008 PCC bond construction program that also added two new buildings, an underground parking structure, and made extensive renovations and upgrades to virtually every building on the campus which serves north and northeast Portland.

“Thanks to the public investment in PCC, we can offer new services and resources to our community while inspiring students to reach father and achieve their dreams,” PCC Cascade campus officials said. “Come tour the library, enjoy treats and giveways, and hear inspiring stories of our neighbors and the neighborhood.”

Other public events during the celebration will include the dedication of the Evelyn Crowell Center for African American Community History – to be installed over the coming year in the Cascade Library; a campus-wide book drive for the Children’s Book Bank of Oregon where books can be donated at the library checkout desk.

The remodeled library and its adjacent new plaza are getting rave reviews from students and staff, while the two new buildings that opened last year – Cascade Hall and the Student Union – have won LEED Gold certification for green design and construction.

The projects are part of the nearly $58 million in campus work funded by a property tax bond measure approved by voters in 2008. An earlier Cascade Campus expansion in the early 2000s added four other buildings to the campus, providing space for a new gymnasium, technical education building, auditorium, and a public services education facility. While the prior expansion came with the displacement of about a dozen nearby residents and businesses and extended the campus out a block south and three blocks west, the latest work was accomplished mostly within the existing campus footprint.

The library remodel, which took more than a year to complete, first required the demolition of PCC Cascade’s 1970s-era Student Center.

Removing the outdated building allowed space for a true front entrance for the library in the form of a two-story glass vestibule. It also opened up space for the new plaza, an outdoor space that extends a campus mall.

Amber Quinn, library supervisor at Cascade, said the remodel solved another major issue: the absence of restrooms. Prior to the bond work, students had to pack up their books and other materials, walk through a passageway and use the facilities in Student Center, then return to the Library and unpack all their materials.

Hoffman Construction added restrooms on both the first and second floors and removed some interior walls to open up common spaces.

The new Student Union is the home to the campus’ resource center as well as student clubs and government officers, a study andlouge area, flexible meeting space, and food service and dining facilities.

The new Cascade Hall houses 14 general purpose classrooms, plus the Center for Careers in Education, the Portland Teachers Program and a childcare center.