Start fundraiser to repair damages caused by others 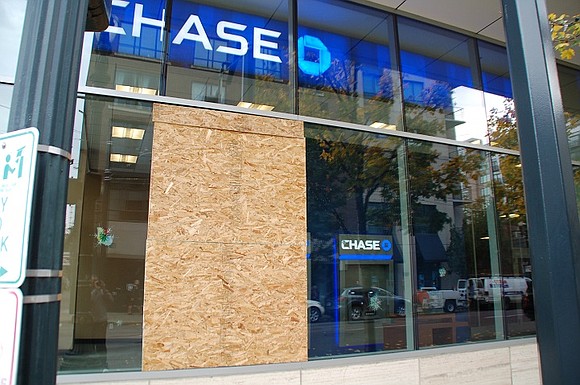 A window broken by rioters during a Thursday night protest against Donald Trump's election as president is boarded up Friday morning in the Pearl District of northwest Portland. Photo by Mark Washington

The following statement is from Gregory McKelvey, a leader for the newly formed group "Portland's Resistance," a coalition of civil and human rights activists, who sponsored a protest Thursday night in opposition to the election of Donald Trump as president:

Last night, in the ongoing wake of Portlanders’ desperate attempts to understand their new reality under a Trump regime, a movement was born - one that we hope will help to elevate Portland as a bastion for peace, refuge, sustainability and social innovation for years to come. The violent actions that occurred last night had absolutely nothing to do with our group.

We would like to take a few moments to disavow the actions taken to destroy property, to clarify the intentions and goals of our new efforts and to offer empathy to all the stakeholders in last night’s protests and those to come.

Our movement (Portland’s Resistance) was born as a direct response to the election of a racist, homophobic, misogynistic, egomaniacal and dangerously reactive President, a congress hell bent on limiting a woman’s right to choose or a Muslim’s right to live and a state that refuses to tax our richest corporations in order to unburden those most taxed among us. It was our aim to channel the shared frustration, fear and anger that is so alive among so many of us considering our future prospects into a unified front for peaceful change.

We outlined many goals and demands for Portland at the beginning of the march, aimed at addressing our city’s most pressing needs and also with the confidence that Portland can truly model the future that so many in our nation and world seek. In doing so we hoped to help provide a constructive outlet for our shared energy.

We made it very clear that ours was a movement born out of love, infused by peace and inhospitable to those that would put us all at risk in the name of actions that are inflammatory, divisive and strategically ill-conceived. That remains our goal.

While our group does not support or condone violence or vandalism of any form, we must consider the reasons for such destruction, the conditions that lead to people feeling that destruction is their only voice. Martin Luther King once said that, “a riot is the language of the unheard.” Those who engaged in destructive actions feel unheard and it is vastly important to us to name why and, moreover, how their voices may be heard constructively.

Portland’s resistance aims to be a positive channel through which the voice of the people can be heard. We will continue to strive towards that goal as we develop our platform, recruit our support base and work diligently with the many organizations in Portland who are already dedicated to building our city up, to creating a municipal safer space.

In support of our goal to have a safe Portland for everyone, we are partnering with organizations such as Milenio (milenio-2016.org) to raise money to repair the damages done to small and local businesses last night. That campaign can be found online at gofundme.com/portlandsresistance-rebuild-fund.

On Friday, Nov. 11 at 5 p.m., we will be meeting for a rally and heal-in at Portland City Hall to talk about our demands to make our city a better place and discuss our campaign to repair the damage that was done to our city last night.

We sincerely apologize to anyone whose property was damaged, even though it was not done by our group, and we invite you to join us, to heal, and to consider the conditions that enrage, enflame and divide us all. Together we can heal this divide.

Together we can change our world.