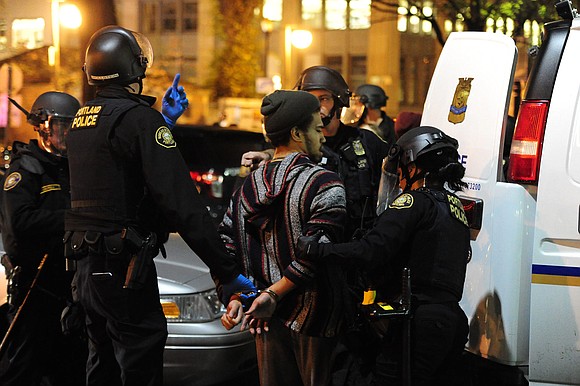 An arrest is made during a protest against Donald Trump’s victory in the presidential election that turned violent in Portland Thursday night. (AP photo by Alex Milan Tracy/SIPA USA)

Thousands of people stunned by Donald Trump’s win in the presidential election set off on a week of daily protests in Portland that were mostly peaceful but also tinged with some of the largest and most destructive protests against Trump in the country. Hillary Clinton won Oregon, but suffered a staggering and unexpected defeat nationally.

“Trump is going to be president, so we need to prepare for that,” Greg McKelvey of the group Portland’s Resistance, said Monday.

McKelvey, a black community activist, law student and member of Don’t Shoot PDX, is the leader of the newly formed Portland’s Resistance group, a coalition of civil and human rights activists who have sponsored many of the protests.

He called the group part of a movement “born as a direct response to the election of a racist, homophobic, misogynistic, egomaniacal and dangerously reactive president.”

On Monday, the sixth straight day of demonstrations in Portland since the Nov. 8 election, saw hundreds of students take a day off from school to gather in the rain to protest in front of City Hall before moving across the east side of the city via the Hawthorne Bridge as officers stopped traffic.

Upset over the president-elect’s comments about minorities and the effect he will have on their communities, the nation and world, the protesters then walked to Benson High School in northeast Portland for a rally, and then up to Lloyd Center before heading north to Jefferson High School.

The student march was completely peaceful, unlike some of the other Portland demonstrations that started off peaceful but led to standoffs with police in riot gear and more than 100 arrests.

One of the most violent episodes occurred Thursday night after Portland’s Resistance sponsored a protest that drew thousands of people, but after more than five hours of protesting ended in a riot. Officers fired rubber baton rounds and arrested at least 29 people who refused to disperse after some protesters smashed windows, spray-painted buildings and ignited a dumpster on fire.

Authorities attributed the vandalism to outside anarchists who did more than $1 million in damages, including using a bat to break car windows at the Toyota of Portland dealership on Northeast Broadway and the smashing of windows in the Pearl District of northwest Portland.

On Friday night, thousands took to the streets again in a Trump protest that started at 5 p.m. but came to a conclusion after 1 a.m. when a protester was shot on the Morrison Bridge when people got out of a car with a gun and got into some sort of dispute with marchers.

Cameron Whitten, a long time Portland activist, witnessed the Morrison Bridge melee but said he didn’t see the shot that injured the bystander.

“Someone pointed a gun in the air and started shooting,” he said.

Police suspected that gang members were involved in the gunfire that wounded a person in the leg. The car used was identified and arrests were later made.

Whitten said he was proud that so many Portlanders were making a difference by confronting Trump’s election and sparking a national and world resistance to a political leader who “has built his career on family privilege, lawsuits and a presidential campaign built on hateful comments.”

McKelvey issued a statement from Portland’s Resistance after Thursday night’s riot to disavow destructive behavior by anarchists and apologize for damages caused by others.

“We sincerely apologize to anyone whose property was damaged, even though it was not done by our group, and we invite you to join us, to heal, and to consider the conditions that enrage, enflame and divide us. Together we can heal this divide,” he said.

The group partnered with organizations to repair the damage to a state office building in the Lloyd District and to other small and local businesses that were vandalized. Online fundraising for the effort as of Monday morning, drew more than $52,000.

Portland Mayor Charlie Hales issued statements that said he supports peaceful protest by people exercising their constitutional rights, but he cautioned that protesters’ walking on to freeways and blocking light rail lines is dangerous for everyone involved.

He said some people were using the protests as cover for “Outrageous, bad, criminal behavior.”