A bridge to community-focused policing 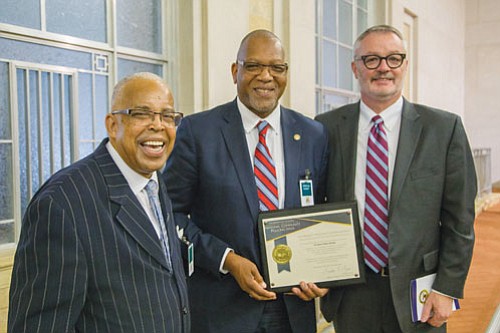 Rev. Dr. LeRoy Haynes Jr. (from left) of the Albina Ministerial Alliance and a long time leader for the group’s Coalition for Justice and Police Reform, joins Portland Police Bureau Captain Kevin Modica and U.S. Attorney for Oregon Billy J. Williams at a national conference on community policing at the Justice Department in Washington, D.C.

Two members of Portland’s black community, one representing activists pushing for police reforms and tackling racial issues within the Portland Police Bureau, and the other a longtime member of law enforcement, were guests of the U.S. Attorney for Oregon at a national conference on community policing.

Williams praised Haynes, who serves on the AMA’s Coalition for Justice and Police Reform, and Modica, for the work they do to improve the relationship between community members and police throughout the Portland area.

“Community policing is founded in the commitment of both law enforcement and citizens working together to build trust and safer neighborhoods,” Williams said. “I admire Captain Modica and Rev. Dr. Haynes’s leadership in building bridges between our law enforcement agencies and the communities they serve.”

Williams said true community-oriented policing is not a goal that can be achieved overnight, but said he was confident that with the example set by Haynes and Modica, “Our work will be a success.”

The awards ceremony was held in conjunction with National Community Policing Week.