No let down in fight for police reforms 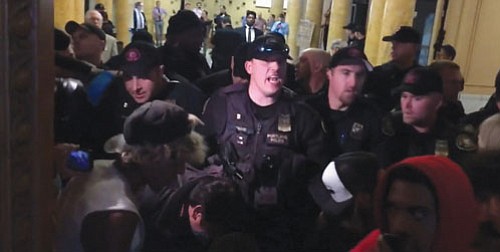 Police officers push activists out of Portland City Hall in a violent confrontation captured in a public Youtube video from Oregonlive.com. The protesters were upset about a closed-door City Council session in which a new police union contract was ratified, a labor agreement that the racial justice activists say let police off the hook over demands for more accountability.

Racial justice activists calling for more police accountability and trust between law enforcement and the community are not letting up on a series of protests after losing a battle with the Mayor and a vote before the City Council on the passage of a new police union labor contract.

When police were ordered to remove protesters from City Hall last Wednesday, a violent encounter ensued with officers deploying pepper spray and pushing a large group of activists out of the building. Police blamed protesters for throwing projectiles at them and 10 arrests were made.

Over 70 activists then took their concerns directly to Mayor Charlie Hales’ southeast Portland residence over the weekend by pitching tents on the planting strip in front of his Eastmoreland home and pledging to stay on the property until he resigns.

“I have no interest in continuing to meet with Charlie Hales,” says Don’t Shoot PDX spokesman Greg McKelvey. “After what I saw him do last week I have lost all respect for his morals.”

In the clash at City Hall some of the protestors, many of them women, can be seen being thrust to the ground by officers, as other activists try to assist them amid the chaos. The situation got much worse when officers started pepper spraying patrons but it was the lack of ambulance assistance and interference from Hales that McKelvey feels was the worst outcome of all.

“We looked up at City Hall and there was Mayor Hales watching down with no emotion on his face. Someone waved at him and he waved back,” says McKelvey. “We need politicians who will run outside of City Hall and help the injured get to safety, not ones who direct a militarized police force to beat women and children.”

The activists do have allies inside city government from City Auditor Mary Hull Caballero and the director of Portland’s Independent Police Review Board, Constantin Severe, who say that ratifying the police union contract was a lost opportunity to address issues relating to police accountability in Portland, independent police reviews and drafting a body-worn camera policy.

Hales won the support of City Commissioner Nick Fish and Amanda Fritz to pass the police union contract, in part because of his urgency to hire new police officers to fill positions left vacant by retirements and departures to higher paying jobs. The new contract promises a nine percent pay raise for current officers and higher starting rate for new officers. It also gets rid of a controversial 48-hour restriction on interviewing officers in police use of force incidents and other administrative investigations.

As McKelvey and others from the Don’t Shoot PDX and local Black Lives Matter movement see it, not only should Hales leave office but Commissioner Nick Fish should leave with him. They initially targeted Commissioner Fritz for recall over her vote until it was discovered that under Oregon law she is immune from recall until six months after her new term begins in January.

Even Shaun King, a prominent national Black Lives Matter figure and columnist for the New York Daily News, took to Twitter to warn Hales of the repercussions the passing of the contract.

“PLEASE TAKE NOTICE. Dear @MayorPDX - we will likely boycott your city if you make this contract official," read King’s tweet. In a separate article, he describes a planned Dec. 5 boycott of Portland and other cities, businesses and institutions “which are either willfully indifferent to police brutality and racial injustice or are deliberately destructive partners with it."

Commissioner Steve Novick, the only vote against the new contract, was understanding of the community uproar. He told the Oregonian the reaction was a response to the mistrust people feel about police. “It’s very unfortunate,” Novick said.

Don’t Shoot PDX and Black Lives Matter will remain stringent in their demands of the city but will continue to advocate without violence, according to McKelvey.

“Our movement will continue to protest against injustice, hold art projects to empower the community, forums to educate the people and a beacon of hope to all those who seek justice in Portland.”

As activists work towards getting both the Mayor and Commissioner Fish out of office early, the promise of Mayor elect Ted Wheeler’s term, which begins in January, may offer some hope.

“I have much more respect for Mayor-elect Wheeler than for Charlie Hales,” McKelvey says, “I think it is important that he notices that the type of violence Hales has inflicted upon peaceful protestors as well as excluding us from policy conversations will not be seen without pushback.”

Wheeler has remained relatively silent during the protests but McKelvey says he has made some attempts to reach out and show support.

“I have confidence that Mr. Wheeler's office will continue to work with myself and our movement,” says McKelvey. “If he does not, we will hold him accountable just like any other politician.”

“We made a mistake on Hales, but I trust we have learned from it and elected a much better mayor. Above all, I think Ted Wheeler has a conscious - something that has been absent from Charlie Hales reaction to the new civil rights movement.”