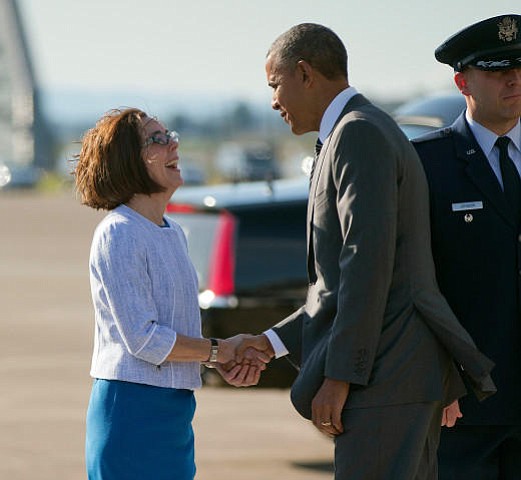 Governor Kate Brown and President Barack Obama at the Oregon Air National Guard Base in Portland in May of 2015. Photo provided by Jefferson Public Radio

There’s one thing President Obama sought to do before leaving office and that’s endorse Oregon gubernatorial incumbent Kate Brown to keep her position.

President Obama released a video last Thursday – the only video message he’s recorded supporting a gubernatorial candidate in this year’s election – where he acknowledge this election’s importance, referred to Brown as his friend, praised her accomplishments as of yet and compelled Oregonians to use their votes to press on with the “real leadership in Kate Brown.”

Brown transitioned from her six-year position as Secretary of State to replacing former Governor John Kitzhaber in February of 2015 after his resignation. Brown formerly won the hearts of Oregonians as the state’s second female governor and the first openly bisexual governor in the nation’s history, but it’s her successes thus far that make her a likely winner.

In the video, Obama touches on the fact that Brown has signed legislation raising Oregon’s minimum wage, made significant investments in career and technical education and became the first United States governor to pass legislation for renewable energy.

“So when your ballot comes in the mail, don’t put it aside with the bills or buy it under a stack of menus,” Obama says. “Open it up. Fill it out. Mail it in.”

“This election couldn’t be more important, and all of us need your voice and your vote to make sure Oregon continues to have real leadership in Kate Brown.”

In his only videoed gubernatorial endorsement of the November 2016 elections, President Obama endorses Incumbent Kate Brown.