Support for the Creation of a Public Bank 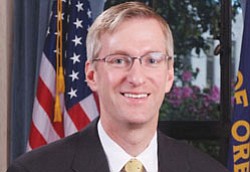 Mayor Wheeler recently announced that the city of Portland, in protest of Wells Fargo’s financial involvement with the Dakota Access Pipeline, will pursue other, more socially responsible, banking alternatives. While a number of local alternatives might fit the mayor’s criteria for social responsibility, there is another solution that the city of Portland could pursue, the creation of its own Public Bank.

To the uninitiated the concept of a public bank sometimes creates concerns that the government intends on getting into the business of banking. Those concerns are misplaced. The term public, in public banking, is a statement of whom the bank will be serving, not who will be responsible for operating the public bank.

One way in which the public bank fulfills its mission is by financing state infrastructure projects. Rather than utilizing a Wall Street bank to underwrite projects, North Dakota borrows directly from the Bank of North Dakota with the BND collecting interest on the loans. After deducting operating expenses and profit, the public bank then returns a portion of the interest income back to North Dakota State Treasury. In effect, the public bank allows the state to borrow at very low interest rates.

Imagine a banking structure in Portland that is similar to the Bank of North Dakota. The mission of a Portland Public Bank could be designed to encourage the socially responsible values that Portlanders hold so dear.

There are several areas in which a public bank in Portland could deploy financial capital. A Bank of Portland could provide the city with low cost/low interest loans for things such as local infrastructure (roads). Taken further, a Bank of Portland could also encourage socially responsible lending within our community by lending for the construction of low-income housing and/or environmentally conscious construction projects, support for local community development banks, as well as bond financing for Portland Public Schools and so much more. The possibilities are abundant and real.

Thankfully the notion of Bank of Portland is not a pie-in-the-sky fairy tale. Right now there is an organization known as the Portland Public Banking Alliance (PPBA) that is advocating for the city to join a growing nationwide movement and create its own public bank. Currently the group is trying to convince the city to finance a feasibility study. If interested please consider contacting the organization, Mayor Wheeler’s office, Portland Treasurer Jennifer Cooperman, as well as the individual members of the Portland City Council.

Justin A. Elardo is an economics instructor at Portland Community College.