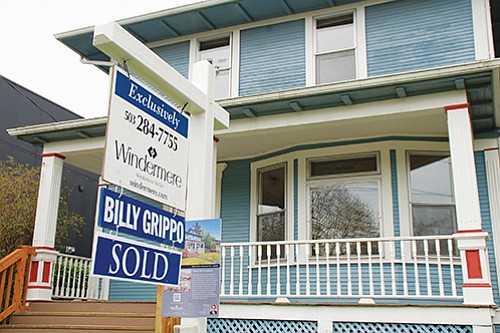 A single family home on Northeast 14th Place in the Vernon Neighborhood just sold for $590,000, a price that put it out of reach for most black residents and continues a trend of gentrification in the heart of Portland’s historic African-American community. Mark Washington Jr.

As rental and housing prices continue to rise and wages remain stagnant, Portland's black community is being hit hard in the struggle to stay housed.

As Denetta Monk, a housing specialist with the Urban League of Portland explained to the Portland Observer, “The fear of being homeless out here is on another level.”

“When it rains for Americans, it's pouring for black Americans. It's affecting everyone, but it's a hurricane for us,” Monk said.

In December, before the Portland City Council released its annual report on housing, Commissioner Dan Saltzman, a landlord himself, was successful in passing an inclusionary housing program which reserves a certain number of affordable units in new, higher density buildings.

Developers rushed to file their permits to avoid the requirements before they went into effect on Feb. 1, and as a result, the emergency ordinance was blunted in its immediate impact, delaying the number of new affordable units that will hit the market in the near future.

The overall trend remains unchanged. Many residents, especially African Americans and other disadvantaged populations, are forced to look for affordable housing at the edge of the city limits far away from their historic neighborhoods, schools and work.

When the Portland Housing Bureau released its report, it was slick and well designed, but the facts and figures it illustrated starkly showed how hard the crisis has hit the black community and how wide the wealth gap had grown.

A single mother working full time at a minimum wage job, earning less than $20,000 annually, can't afford to live in any neighborhood in Portland. The figures show it takes an annual income of $70,000 to buy the average home in Portland. That puts nearly every home out of reach for black Portlanders, who earn a median income of $30,000. As a result, most African-Americans in Portland are renters and pay between 30 percent to 90 percent of their take home income on rent.

The housing report also shows most of the migration of black residents moving out their historic neighborhoods of north and northeast Portland have moved east to communities like Pleasant Valley around Southeast Foster and beyond 122nd Avenue. These areas have less access to public transportation, grocery stores and longer commute times to work and school. The health impact of the stress of moving, barriers to healthy food, less time spent with family and the fraying of social fabric and even has an impact on health.

“Gentrification is such bigger issue than “oh it's inconvenient, it's driving up costs,” Monk said. “It's taking time out of your life literally and people don't necessarily think of that.”

A new McArthur Foundation research, shows that 51 percent of all Americans, and 65 percent of families of color, have had to make at least one significant sacrifice in their household budget in the past three years to afford their rent or mortgage — such as earning more income with a second job, delaying medical treatment, avoiding paying other bills, and moving to another school district or unsafe neighborhood where housing is less expensive.