A play about what happens if we let fear win 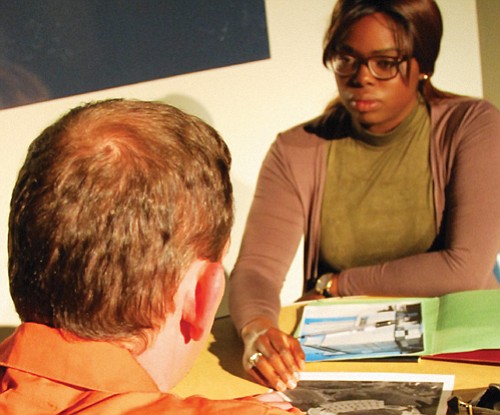 Gavin Hoffman (left) is a prison warden who has been “left out to dry” by the Trump Administration and Andrea (Whittle) Vernae is a history writer trying to figure out “why he did what he did” in the play “Building the Wall,” a terrifying and gripping production by the Triangle theater group about what happens if we let fear win. Tisha Wallace

The Portland theater company Triangle Productions has joined other theaters around the county in rolling out a world premier play about what happens if we let fear win.

“Building the Wall,” is a terrifying and gripping story, written by Pulitzer Prize/Tony Award winning playwright Robert Schenkkan, about an immigration round-up of unprecedented scale and a declaration of martial law.

In a play that harkens George Orwells’ 1984 and the Nazi regime, the Trump Administration has carried out his campaign promise to round up and detain millions of immigrants. Now 2019, a history writer interviews the supervisor of a private prison as he awaits sentencing for carrying out the federal policy that has escalated into the unimaginable.

The illuminating drama delivers a powerful warning and puts a human face on the inhuman, revealing how when personal accountability is denied, what seems inconceivable becomes inevitable.