Mayor up front on the issues 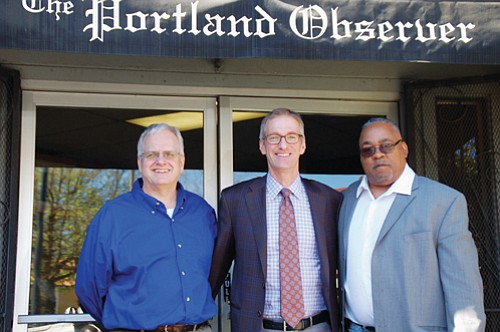 Portland Mayor Ted Wheeler pushed his agenda on the critical issues of housing affordability and police reforms during a visit to the offices of the Portland Observer, Oregon’s longest serving minority publication Friday.

Wheeler, who assumed office in January, laid out his vision to make housing more accessible to lower income and minority communities by supporting workforce training programs and higher paying jobs; the construction of affordable housing units; and fair housing practices. He also spoke of how he hopes to guide the Portland Police Bureau on new policies to fight bias in its procedures and practices and the overrepresentation of black and minority defendants in the criminal justice system.

Wheeler, who was elected in May of 2016, succeeded Charlie Hales as the mayor of Oregon’s largest city. He previously served as Oregon State Treasurer and chair of the Multnomah County Commission.

Speaking to the critical lack of accessible housing in the Portland area, Wheeler said it was important for city officials to rethink how they are approaching issues of housing and affordability.

“The problem is that we’re disconnecting housing from the reality of our economy,” Wheeler said.

In order to make housing more accessible to disadvantaged communities, the mayor points to the city’s new 2035 Comprehensive Plan to better link education and vocational programs to growing a workforce with incomes to support housing.

“The economic displacement is now being exacerbated by a lack of access to the educational and job training opportunities,” Wheeler said. “It’s a vicious circle at this point.”

The mayor, who was a key proponent of newly elected City Commissioner Chloe Eudaly’s stopgap ordinance to make landlords pay tenant relocation expenses under certain circumstances, says that the city must begin thinking about how it can help to keep Portlanders economically competitive.

“If we can connect more people to the education and the job training they need so that they can latch on to those economic opportunities, they will be much more likely to be able to stay right here,” Wheeler said.

The city’s renter assistance policy, which was enacted in February, mandates that landlords pay the relocation expenses of their tenants in the case of a no-cause eviction or if the rent is raised by 10 percent or more. The payouts can range from $2,900 to $4,500, depending on the size of the housing unit.

The measure, which will only last through October is part of emergency reprieve granted to low and middle-income renters in the city. Wheeler says that his soon-to-be-released Fiscal Year 2018 budget will be reflective of longer-term solutions for abetting the housing crisis.

The mayor would like to see more regulatory wiggle room for future housing developments winning city approval, insisting that zoning rules can be loosened up to aid developers who are attempting to create more housing. By allowing more structures such as duplexes to be constructed within single residence zones, for example, the city can maximize usage on its increasingly expensive real estate, Wheeler said.

“If we’re really serious about housing affordability, then we need to go down that road,” Wheeler asserts.