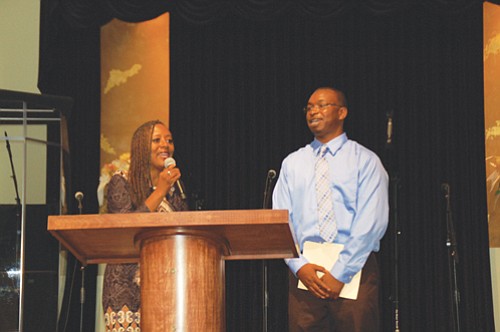 Pastor April Murchinson of Emmanuel Temple Church introduces Good in the Hood President Shawn Penney during a special ceremony at the north Portland church on Sunday to honor him for his bravery and leadership in response to the death threats made against the multicultural celebration last June. Christa McIntyre/The Portland Observer

Shawn Penney did not let racial and violent threats stop him or his community when the multicultural Good in the Hood Festival received death threats last June. On Sunday, Penney, the president of the festival, was honored for his bravery and leadership in response to the hatred spewed.

His church community in north Portland wanted him to know that his dignified efforts to turn back the attacks and continue with the festival drew their respect and appreciation.

In spite of a terrible situation, his love for people and desire for unity overcame the threats, said Pastor April Murchinson of Emmanuel Temple Church.

Penney has led Good in the Hood, the Pacific Northwest’s largest annual multicultural festival, for the last 12 years.

On June 5, a letter with Ku Klux Klan images and violent racist threats was mailed to Good in the Hood via way of the non-profit organization’s offices next door to King Elementary School, demanding a shutdown of the celebration. The letter threatened Penney personally and promised “a bloodbath,” should the festival go on. He and his family were given an FBI security detail because the agency believed the letter to be credible and had seen similar racist threats in other parts of the country. An investigation into the letter is ongoing.

On Sunday, Emmanuel Temple honored Penney with a community recognition award. Pastor Murchinson introduced him, describing Penney as an outstanding role model, an activist and a black leader in the community.

He was also honored for his past work in the community, helping disadvantaged children and people of all colors and races to further their education and get ahead in life.

“Mr. Penney will always fight for bringing communities and family together,” Murchinson said.

Penny said the threats against Good in the Hood, were “so senseless.”

The congregation drowned out Penney’s speech with clapping and praise.

“As long as I am leading Good in the Hood, I am going to continue to bring families and community together at all times,” he said. “I’m saying today, we will not back down for senseless acts or threats. We will rise as one, until victory is won.”

Penney also indicated that the threats against himself and his family have continued. Finishing his speech, he thanked God, the Emmanuel Temple congregation, Bishop C.T. and First Lady DeAngeloa Wells for the honor and the support given to his work and family.

As the Emmanuel Temple gospel organist played softly in the background, the congregation burst into excitement as Bishop C.T. Wells presented him with the Neighbor 2 Neighbor award.

Bishop Wells took his time to tell Penney how much the community recognizes and appreciates his work and ended by saying: “We present to you this appreciation for your obedient service to the community and specifically for maintaining unity through the Good in the Hood, a yearly celebration of the family of man. I salute you.”