A Space to Remember 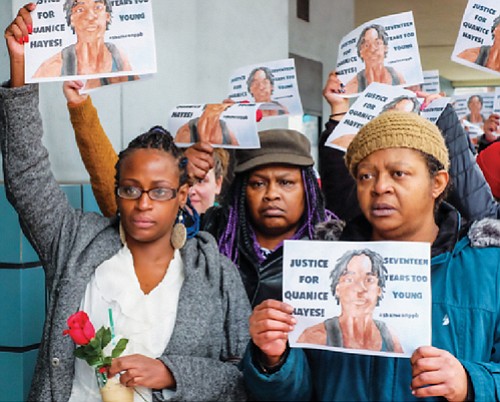 Venus Hayes the mother of Quanice Hayes, the 17-year-old killed by Portland Police on Feb. 9, and members of her family, head to the City Council on March 1 to address Mayor Wheeler and demand transcripts of the grand jury. A new exhibit called ‘Stolen Angels’ by the activist group Don’t Shoot Portland takes aim at police shootings and the people killed. Photo by Kathryn Kendall.

A downtown art gallery is providing a space to remember with love, honor and positivity those who have died after being shot by police.

“Stolen Angeles” is new exhibit sponsored by the activist group Don't Shoot Portland that takes aim at the high number of police shootings and the people killed in those encounters.

Located at the Williamson and Knight gallery in the Pearl District at 916 N.W. Flanders St., the exhibit opened Thursday and runs through Saturday, Aug. 19. This coming Thursday at 1 p.m., there will be a demonstration at the gallery to mark the one year anniversary of the Gresham murder of Larnell Bruce, a black man who was run over by white supremacists outside a local 7-11 store.

“Stolen Angels” is meant to offer a stark contrast from what’s often found in the media where people killed in police actions are portrayed as criminal threats that in turn justify the theft of life, where bodies are systematically dehumanized. Their families are rarely given a public-facing opportunity to visually remember their children in a manner that does not cause further trauma.

“In the era of a Trump administration we must use art to communicate our humanity. Let us share our history, pain, and courage,” said organizers of the exhibit.

Don’t Shoot Portland is an organization and community action plan led by Portland activist Teressa Raiford who has fought for social change in Oregon and has solidified the establishment of a grassroots movement for racial equality, social justice and political accountability.