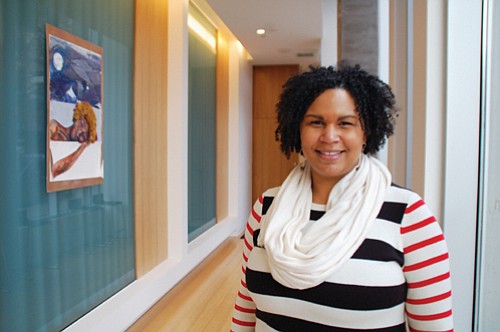 Sita Symonette has helped make waves in equity and inclusion during her five year tenor on the board of Planned Parenthood Columbia Willamette. Now she’s the first African American woman to chair the board in its 54 year history. Photo by Danny Peterson

Planned Parenthood Columbia Willamette has a new chair, small business owner and health care practitioner Sita Symonette, the first African American woman to lead the board in its 54 year history.

Symonette, the operator of Black Pearl Acupuncture in downtown Portland, was serving as a board member for the reproductive health center since 2012 and vice chair since 2015, when the board last month elected her to lead the nonprofit’s governing panel.

“To step into this role is wonderful,” Symonette told the Portland Observer. “I'm really honored and humbled to be able to serve.”

Planned Parenthood provides affordable sexual and reproductive health care with services that can range from contraception to screenings for sexually transmitted diseases and breast cancer. Narrowing the disparities in healthcare services among women of color is one of Symonette’s top priorities.

“Making sure that people have access to high quality health care, and that includes birth control, is so important for our communities, Right. I mean, in the long run, it keeps the community much more healthy if we can have preventative care,” Symonette said.

Jimmy Radosta, Planned Parenthood’s local media relations director, said reproductive healthcare disparities are rampant among women of color. Latinas, Native Americans, and African Americans have higher rates of cervical cancer than other groups and African-American women have the highest incidence rate of breast cancer among women younger than 45. Cervical and breast cancer screenings are one of the organization’s flagship services and 40 percent of their patients are people of color, Symonette said.

Some of the other services Planned Parenthood provides are emergency contraception, fertility, sexually transmitted infection testing, pregnancy testing and counseling, well checks, sexual education, abortion care (which accounts for 6 percent of their services), and emergency and preventative contraception medicine.

Back in October, the Trump administration rolled out a mandate which gives all employers, not just religious institutions, the option of not covering employees’ birth control medicine on the grounds of religious or other beliefs —a move that overturned an Obama era mandate from the Affordable Care Act.

Planned Parenthood advocates said this could cause as many as 360,000 women to lose coverage of birth control medicine in Oregon in 2018, despite Oregon’s Reproductive Health Equity Act passed in August. The law will expand Oregonians’ access to no-cost reproductive health services like contraception and prohibits discrimination in the provision of those services, but won’t fully go into effect until 2019, hence the gap in coverage.

According to a 2011 report from the Guttmacher Institute, 58 percent of women have used contraceptive medicine, at least in part, for health needs other than pregnancy prevention, including endometriosis, fibroids, menstrual regulation, and polycystic ovarian syndrome, which is prevalent among women of color.

As a health care practitioner herself, through her acupuncture business, Symonette said she saw a need for people of color to receive culturally competent care.

"I'm a black, queer woman, so I have a personal investment in making sure that we're an equitable and inclusive organization,” Symonette said.

Symonette has overseen an expansion of services during the time she has served on the board. She supported and advocated for Planned Parenthood to start providing transgender hormone replacement therapy for people 18 or older, for instance, which just began within the last couple of years. That therapy started at the clinic-level, Symonette said, and then-CEO Stacy Cross also advocated for it. It was later voted in by the board as an official service offering. And thanks to the Reproductive Health Equity Act’s anti-discrimination component, more access to health services like this, as well as cancer screening, will be made available to trans people.

“We provide confidential care and non-judgmental care. And I think a lot of people come to us for that. You know, you might not feel comfortable going to your primary care doctor to get, um, trans-hormonal care, but maybe you're more inclined for Planned Parenthood because you know that we're so supportive of our communities that we serve,” Symonette said.

Other services added in the last five years include prenatal care and telemedic services, which is when patients can video conference a doctor or nurse practitioner, for things like prescription refills, remotely.

Symonette has personally advocated for diversity within the organization, promoting African Americans, members of the LGBTQ community, Native Americans, Latinos, and Asians as board members and creating two equity and inclusion positions, both of which were met with support from her fellow board members.

She holds a bachelor’s degree in biological psychology from Western Washington University and participated in federally funded neuroscience research while there. She also has a master’s degree in acupuncture and Oriental medicine from Oregon College of Oriental Medicine and her practice specializes in women’s healthcare; fertility, anything related to menstrual cycles, and menopause. She has a 7 month old child with her wife, Lai-Lani.

“I'm the first woman of color to chair this board. It's important for us to see ourselves in places of leadership. I think that that is part of health equity,” Symonette said.