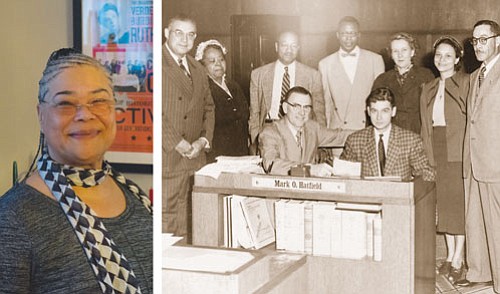 (From left to right) Charlotte Rutherford, a former civil rights attorney and the daughter of an historic Portland couple who worked tirelessly to outlaw discrimination and pass other civil rights protections during the Civil Rights Era, honors her late parents by helping preserve Portland’s Black History. Photo by Zachary Senn/The Portland Observer Verdell and Otto Rutherford (far right) were among the leaders of Portland civil rights community in the 1940s and 1950s who worked with then-state Rep. Mark O. Hatfield to adopt Oregon's Public Accommodation Act, the 21st state in the union to pass legislation outlawing discrimination in public places. Photo courtesy Oregon Historical Society

A snapshot of Portland’s black history is being preserved at Portland State University, thanks to the efforts of the daughter of two of the city’s most prominent civil rights leaders.

Charlotte B. Rutherford, a Portland native and herself a former civil rights attorney, has helped to facilitate the preservation of her mother’s meticulous documentation of some of the black community’s most prosperous days.

The Verdell Burdine and Otto G. Rutherford Collection, which now resides on-site at the PSU Library Special Collections Division, continues to impact and inform the community in unprecedented ways.

“She was a collector,” Charlotte Rutherford says of her mother, Verdell Burdine Rutherford. The family’s roots in Oregon can be traced to when her mother was an infant in 1913. But raised in Yakima and educated as a secretary, she didn’t move permanently to Portland until after her high school graduation. Despite being proficient in shorthand and a talented typist, like many black females during the time, she was unable to obtain a job other than domestic work.

Charlotte Rutherford explains that her mother’s training as a secretary and her meticulous nature helped guide her preservation of the black history artifacts that are now in PSU’s collection, “I don’t know why she saved, she just saved!”

The documents feature a wide array of content, from recipes to newspaper clippings to family photos to obituaries.

In regards to the newspaper clippings, some of which date as far back as the late 1800s, Charlotte Rutherford says that her mother began saving articles that reflected the black community in a positive light, “Because she wanted us, her children, to have access to them.”

Charlotte’s father, Otto Rutherford, served in the leadership of the Portland Branch of the NAACP throughout the 1940s and 1950s, and was serving as the organization’s president when the Oregon Public Accommodations Act was passed in 1953, the 21st state in the union to pass legislation outlawing discrimination in public places.

One of the collection’s most iconic images showcases both Otto and Verdell Burdine Rutherford present with Rep. Mark Hatfield at the bill’s signing. A copy of this image now hangs in the State Capitol in Salem.

The couple’s persistence to enact the watershed civil rights legislation came after 33 years of effort. All they did on behalf of advancing civil rights at the time was strictly on a volunteer basis, Charlotte Rutherford explains, stating that they were never compensated for their work.

After returning to Portland in the late 1990s from her own career as a civil rights attorney with the NAACP’s Legal Defense Fund on the East Coast, the younger Rutherford began the task of clearing through her parents’ belongings.

“I didn’t really know what was in the boxes, I just had sense enough not to throw them away,” Rutherford explains. Eventually, through the help of friend and former state legislator Avel Gordly, the collection made its way to PSU.

“It has preserved the culture from a specific time period, from the ‘40s through the ‘80s,” says Rutherford, describing the collection’s significance. Rutherford says that this was the height of Portland’s black community, “Because after the 90s, people started being dispersed.”

The wide variety of content within the Rutherford collection offers a valuable survey of the historic strength of the community, as even items such as dance programs can offer insight into what neighborhoods in north Portland once contained: “They sold advertisements… So it would show you what black businesses existed, and where they were located, up and down Williams Ave. and up and down Vancouver Ave.”

Today, the work of the Rutherford family continues to serve Portland’s black population. Two documentaries, “Lift Ev’ry Voice,” and “Local Color,” both of which were produced by Oregon Public Broadcasting, made extensive use of the material present in the Verdell Burdine and Otto G. Rutherford collection. In addition, a CDC-funded Oregon Health and Science University initiative has taken advantage of the images. The ‘Sharing History through Active Reminiscence and Photo-imagery,’ or SHARP, program is utilizing the extensive nature of the collection to promote community memory building and learn about Alzheimer’s risk in African Americans over 55.

In November, Charlotte Rutherford was honored with the Continuing the Legacy Award by the Portland Branch of the NAACP for her efforts preserving and donating the collection to PSU’s Library. Rutherford is quick to point out that PSU is always eager to expand its records relating to the history of Oregon’s black community, and encourages individuals with potentially noteworthy content to reach out to the university.

Says Rutherford, “It’s a snapshot of a period of time that probably doesn’t exist like that anywhere else.”